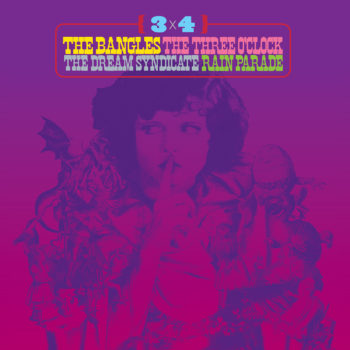 At the dawn of the ’80s, The Bangles (then just known as The Bangs), The Dream Syndicate, The Three O’Clock (originally called the Salvation Army), and Rain Paradewere all new bands in Los Angeles who formed the core of the small yet influentialPaisley Underground scene. In 2013, the four ensembles got back together to share the bill at L.A.’s Fonda Theatre for a charity concert. The show went so well and everybody had so much fun that Danny Benair (The Three O’Clock), Steve Wynn(Dream Syndicate), and Vicki Peterson (The Bangles) started talking about doing some type of album to celebrate their Paisley Underground beginnings.

The idea quickly formed that each band would cover one song of the three’s. Plans were discussed then the four groups got to work.  the result is the terrific twelve-song collection succinctly entitled 3 x 4: The Bangles, The Three O’Clock, The Dream Syndicate, Rain Parade.

Bundle the CD or 2xLP with an exclusive Black Light Poster! Get yours here.