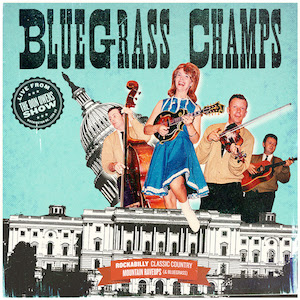 “When I needed inspiration I went down and listened to Scott Stoneman solo.” – Jerry Garcia

During World War II, thousands from rural America flooded Washington, D.C. seeking jobs, bringing with them a mix of country, bluegrass, blues and jazz. Propelled by A.M. radio, television and honky tonks, musically, it was an exciting time in the nation’s capital.

Country Music Hall of Fame inductee Pop Stoneman and his family were among those moving to the area to seek out a better life, and brought their unrivaled bluegrass musicianship with them. His wife and their thirteen children all played instruments and sang, with four of those kids becoming the core of the Bluegrass Champs. Comprised of Scott, Donna, Van and Jimmy Stoneman, the Bluegrass Champs held their own among other D.C. talents like Roy Clark, Patsy Cline, Link Wray, and Charlie Daniels.

These previously unreleased recordings spotlight the Bluegrass Champs and their performances on The Don Owens Show, where, as the houseband, they were often called upon to back guest singers and players.

Recorded by Leon Kagarise directly from a late 1950s television broadcast, this record showcases the jamboree nature of the program, including live commercial reads and commentary by Don Owens himself. The legacy of the Bluegrass Champs and the importance of these recordings are detailed in the liner notes written by renowned rock and blues expert Joe Lee of Joe’s Record Paradise.

Live From The Don Owens Show features covers of Hank Williams, Roy Acuff, The Louvin Brothers, Gene Autry, Flatt & Scruggs, and Bill Monroe, among others. One of those covers includes the Luke Gordon-penned tune, “Goin Crazy,” covered by the Bluegrass Champs live on the Don Owens Show in the late 1950s. The musicianship of the legendary Stoneman family is in full swing, highlighted by the jaunty nature of the song and the sing-along country chorus featuring Luke Gordon’s signature crooning.

Today, Bluegrass Today premiered “Goin’ Crazy,” and noted, “It’s always a cause for celebration when archival bluegrass recordings are cleaned up and released for the enjoyment of contemporary audiences. Especially when it involves radio transcriptions, which formed the bulk of the bluegrass music performed in 1940s and ‘50s.”