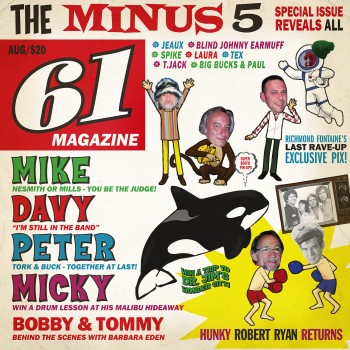 The Minus 5, the folk/rock/pop collective captained by Scotty McCaughey, announce their latest release, Of Monkees and Men, out August 19 on Yep Roc Records. An imaginative tribute to the Monkees’ legacy in music and popular culture, the album was previously only available in a five-LP, limited edition 2015 Record Store Day release.

The album is now available for pre-order, with an instant download of “Robert Ryan is Among Us.” Watch the performance of a few songs in the newly premiered Sawyer Sessions, and be sure to check out Scott Mccaughey talking about The Monkees.

Of Monkees and Men, as a separate LP, comes on the heels of The Monkees’ 50th Anniversary. “I was eleven years old when I first heard ‘Last Train To Clarksville,’” McCaughey remembers. “And I became a lifelong Monkees fan in that moment.” With Of Monkees and Men, McCaughey’s fandom has reached new heights, and of his obsession with ‘60s rock, AXS notes, “The Minus 5 always adds up to a good time for nerdy rock history buffs,” but adds, “It’s also fantastic, even if you aren’t a nerd.”

The album features nine original songs, that pay heartfelt homage to the Monkees as well as other friends and artists influential to McCaughey’s musical psyche. Side One tackles each member of the Monkees in song, starting with the ten-minute epic “Michael Nesmith,” and ending with “Boyce & Hart,” which praises the songwriting team behind many beloved Monkees hits. Side Two bows to iconic actor Robert Ryan, the brilliantly literate Portland-based Americana band Richmond Fontaine, and, in “Blue Rickenbacker” and “Weymer Never Dies,” two lost comrades that loom large in McCaughey’s development into a rock and roll lifer.

Oft-seen over the years with the Young Fresh Fellows, R.E.M., the Baseball PRoject, Tired Pony, Tuatara, Robyn Hitchcock & the Venus 3, etc., McCaughey guides the band as a singer, songwriter, and multi-instrumentalist. The Minus 5’s lineup on recordings and performances is constantly and intentionally in flux, dependent on “musician availability, whim, and wind direction.” Of Monkees and Men includes members of R.E.M., The Smithereens, and Laura Gibson as the girl in “Davy Gets The Girl.”