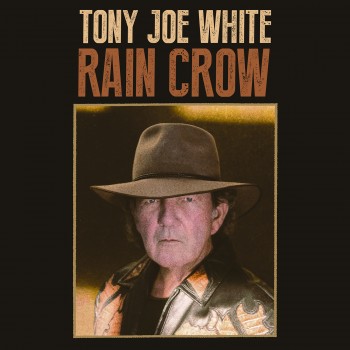 The album is now available for pre-order at the artist website, Yep Roc Records or digital providers with an instant download of “Hoochie Woman,” which premiered at Rolling Stone Country and is now at all streaming services.

Of the song, Tony Joe says, “She is a woman who has magic, although not quite like a

conjure woman. And she likes to dance and be with her man (Smoochie Man), and a conjure don’t like company at all. I’m more at ease with Hoochie, but I believe Leann, my wife and co-writer, sometimes has a little “Conjure Woman” in her.”

Recorded at his own studio and produced by his son, Jody White, Rain Crow summons recollections of long ago, when animals foretold the weather, tongue-talking worshippers proved their faith by handling snakes and a “bad wind” could drive a man to edge of insanity.

The nine-song set features new compositions White wrote over the past three years, including co-writes with his wife, Leann, and Billy Bob Thornton on “The Middle of Nowhere.”

Known for popularizing swamp music, he wrote gems like “Polk Salad Annie” and “Rainy Night in Georgia,” and has had his songs performed by Elvis, Ray Charles, and Tina Turner.

In 2014, White was profiled in the Nashville episode of HBO’s Sonic Highways and performed “Polk Salad Annie” with the Foo Fighters of The Last Show with David Letterman.

Listen to “Hoochie Woman” below.

Pre-order the album on CD/LP from the Yep Roc store to bundle your order with a t-shirt, or download/stream on Apple Music, Amazon Music, iTunes, Google Play, and Spotify.