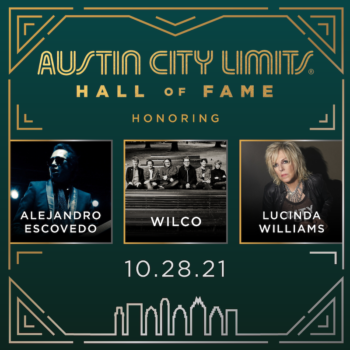 We’re excited for Alejandro Escovedo to be honored by Austin City Limits‘ Hall of Fame on October 28, when he will be inducted alongside artists Wilco and Lucinda Williams! This year’s ceremony recognizes the three inductees described by Austin City Limits as “a pioneering trio of music’s great live acts.” The celebration will be held live at The Moody Theater in Austin, Texas, and will be broadcasted nationwide on PBS stations.

Alejandro, described by Rolling Stone as a “rock and punk godfather,” has performed at Austin City Limits five times, his earliest in 1983 with his band, Rank and File. The singer and guitarist has made a prominent name for himself over the course of his music career. His most recent project, La Cruzada, the all Spanish version of his 2018 album The Crossing, has only further solidified him as an original, inspirational rockstar, and one so deserving of this honor.

“The San Antonio-born, California-raised trailblazer has been a punk of the rebel kind in early band The Nuns, a cowpunk of the non-Western variety in Rank and File, commander of a guitar army in The True Believers, an orchestral conductor in his solo work, and a sensitive boy who has outrun death, demons, lust, and lost love in his songs. Crossing borders, jumping barriers, taking risks, betting it all: that’s the path Alejandro Escovedo has taken in his lifelong search for the heart of rock ‘n’ roll.”