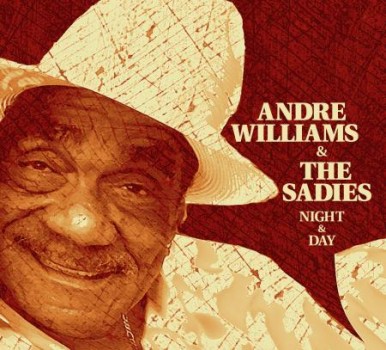 “The songs here range from R&B to raunchy gutter rock and roll, from heartbreak to ribaldry … It all coalesces into a deep vibe and a unique artistry.” – UTNE Reader

Canada’s finest live band, The Sadies, have reunited with explicit soul singer/cult legend Andre Williams for the new album Night and Day, available now from Yep Roc records. Starting today, you can stream the album in its entirety exclusively at AOL Spinner.

Night and Day is the result of sessions that began in 2008 at Key Club Studio in Detroit and captures Andre, then 70 years old and still using at the time, at his most raw, honest, and immediate. No filter. Andre is aided by a stellar cast of musical friends, dirty bluesers who have earned the trust of the ancient hustler, including Jon Spencer (who directed these sessions) and Matt Verta-Ray of Heavy Trash, Danny Kroha of Detroit’s own gutter-blues superheroes, The Gories, the unsinkable Mekon, Jon Langford, and of course, behind it all, The Sadies’ long-time line-up of Dallas Good on guitars and keys, his brother Travis Good on guitars and fiddle, Mike Belitsky on drums, and the mighty Sean Dean on the bass. The result is a raw, gritty slice of raunch rock that has attitude in spades and the hooks and playing to back it up.

The story starts at Key Club Studio, an old school jungle of analogue gear an hour outside of Detroit. Andre had just been sprung from a few days in the county cooler where he was being held until his manager came to bail him out, a charge he would eventually beat, but his most recent stop in stir is well reflected on this record in tracks like “I Gotta Get Shorty Out of Jail,” featuring fabulously retro cool back-up vocals by Sallie Timms and Kelly Hogan, and “Your Old Lady,” a song about sending a lover back to her man after he gets out of prison.

Throughout these sessions, Andre kept his rum buzz and his harangue on, and even if he showed up missing his bottom row of dentures — he growls “I like my rum, coz I got no teeth, I let it flow over my gums” — he was still able to drawl and percolate his continuing narrative of life in songs. In “America” he sings that “Living in America ain’t no fun, better have some money or you’ll be on the run, and it’s a goddamn shame, without cash you’re trash… the men are dogs, the women are hogs, but that ain’t a bad thing… it’s better than living in Africa.”

Behind Andre’s dark take on “America,” and throughout Night and Day, background vocals are handled by the dynamic duo of Kelly Hogan and Sally Timms, who put Andre’s worldview into stark contrast with their flawless, hopeful harmonies.

Since these sessions, Andre was able to shake off some of his demons and has been living clean ever since. Says Andre, “I like where I am now. My family admires me now. I kinda wanna keep it like that.”

The resulting record is a modern classic, with Andre showing remarkable range -from heartbreak and bitterness to ribald humor, swagger, raunch, sleaze, fear and retribution, romance gone right and romance gone wrong, and all in the spirit of the sloppy fun that has made him a legend.

Night and Day, indeed. There is wisdom in these grooves.

Click below to check out the Night & Day bundles available exclusively at the Yep Roc Store and save 15% on your order!