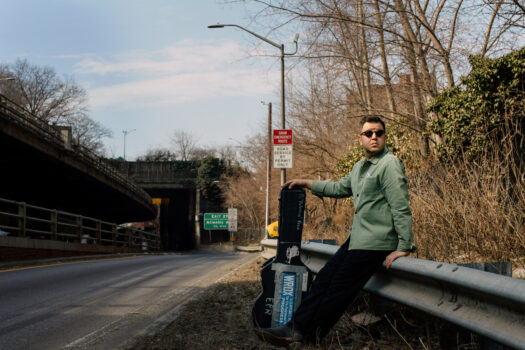 “Country and soul music have always been two parts of the same stream,” says Eli Paperboy Reed. “The influence flows in both directions.”

Take a listen to Reed’s exceptional new album, Down Every Road (Yep Roc Records), and you’ll hear exactly what he means. Recorded in Brooklyn with longtime collaborator Vince Chiarito (Black Pumas, Charles Bradley), the record finds Reed reimagining a host of vintage Haggard tunes as classic soul rave-ups, tapping into all the hurt and heartache of the country legend’s iconic catalog and channeling it into explosive, high-octane performances fueled by punchy horns and ecstatic vocals. Reed’s guitar playing here is more Pops Staples than Roy Nichols, and the production more FAME than Bakersfield, but there’s an obvious reverence underlying the whole project, a deep well of respect and knowledge that allows Reed to inhabit the songs and make them his own without sacrificing an ounce of honesty or integrity. He changes little in the way of melody and architecture on the album, instead recasting the arrangements to present Haggard’s tunes in an entirely new context, one that blurs the lines of genre, geography, and race to reveal the common, distinctly American threads tying them all together.

“I really don’t think you can say enough about the intersection of country and soul music in American culture,” says Reed. “In the 60’s and 70’s in particular, you had covers going both directions and becoming big hits with both black and white audiences, and that was because underneath all the labeling and the marketing, you had songs that spoke to something fundamentally human in all of us.”

It was that fundamental humanity that drew Reed to country music in the first place. Growing up in Massachusetts, he was introduced to Haggard by his father, whose extensive record collection contained a wide array of both old-school and contemporary country songwriters. Though Reed found much to love in George Jones and Waylon Jennings, there was something about Merle that stood out from all the rest, something that captured his imagination in a way that few other singers and songwriters ever have.

“His music was more adult, more aggressively honest and edgy,” reflects Reed.  “He could get to the heart of these extraordinarily complicated emotional sentiments in two-and-a-half minutes, and that was something that really stuck with me as I began to find my own path as a songwriter.”

Reed’s path would eventually take him to Clarksdale, MS, where he immersed himself in the juke joint culture of the Delta as a teenager, and the south side of Chicago, where he played piano and organ in the church of famed gospel singer Mitty Collier in his twenties. In 2008, Reed returned to the Boston area and began turning heads with a series of studio albums that earned widespread critical acclaim, with NPR hailing his music as “inspired, raw and powerful” and Uncut lauding its “urgent, electric energy.” The records landed Reed multiple major label deals, scores of song placements in film and television, and festival dates around the world as he established himself as one of the most compelling and consistent soul men of his time. Along the way, he often toyed with the idea of paying tribute to Haggard, recording a tune here or working up an arrangement there, but the relentless pace of his schedule ensured that the project remained little more than a daydream until the spring of 2020, when the COVID-19 brought much of the music industry to a grinding halt.

“With touring off the table for an entire year, it felt like the perfect time to tackle my wishlist,” says Reed, “and this album was at the top of it.”

Teaming up with Chiarito and frequent bandmates Mike Montgomery (bass) and Noah Rubin (drums), Reed cut the core of the album live on the floor at Hive Mind Recording in Bushwick, capturing raw and intuitive performances that offered little opportunity to overthink or second guess things.

“I purposely didn’t send the guys the originals,” explains Reed. “I wasn’t interested in having them recreate anything. I wanted them to just interpret what I was bringing to the table with my guitar and vocals in the moment and play what felt right.”

It’s that balance of respect and reinvention that propels the record beyond the realm of tribute and elevates it into something wholly original and unique. Album opener “Mama Tried” sets the stage, with Reed fearlessly tackling the collection’s most well-known Haggard tune right out of the gate. Memphis organ and Stax horns replace Haggard’s twangy guitars and shuffling rhythm here, as Reed’s blistering vocals burst from the speakers and transform the laidback melancholy of the original into a fierce and defiant desperation.

“Merle was never a screamer,” explains Reed. “He kept everything simmering just below the surface. But I wanted to see what kind of catharsis could happen if you cut loose and finally unleashed all of that raw emotion.”

The effect is intoxicating. Tracks like the profoundly funky “I’m Bringing Home Good News” and vivacious “It’s Not Love But It’s Not Bad” channel the energy and flash of James Brown or Wilson Pickett, while suave, debonair takes on tunes like “I Am A Lonesome Fugitive” and “Silver Wings” hint more at the uptown cool of Chuck Jackson or Major Lance, and Reed’s rich, velvety vocals on songs like “One Sweet Hello” and “Teach Me To Forget” offer nods to Sam Cooke and Jackie Wilson. No matter whether he’s shouting or crooning, though, Reed manages to breathe urgent, insistent life into the lyrics, which still sound just as vital and visceral as the day they were written.

“People often think of country music as being all about story songs,” says Reed, “but Merle wrote moment songs. Like the best blues and soul artists, he captured what his protagonists were feeling in the exact moment they were singing it to you, and there’s an undeniable immediacy to that.”

Perhaps no moment on the record is more arresting than album closer “Today I Started Loving You Again,” which Reed performs here with an assist from New Orleans singer and songwriter Sabine McCalla.

“Back in 1969, Capitol Records commissioned a duet version of this song from Buck Owens, who was their biggest country star, and Betty Swan, who was their most successful soul singer,” says Reed. “The label ultimately shelved it out of fears that an interracial collaboration would damage Buck’s career, but a few of the acetates eventually leaked out, and I happen to own one of them.”

When Reed called McCalla and explained the story and his vision for resurrecting the long lost duet, she gladly stepped into Swan’s shoes and helped deliver an unforgettable—and long overdue—rendition.

“It’s probably the most straight ahead interpretation on the album, and that’s the way I wanted it,” Reed explains. “The arrangement was good enough to be released back in 1969, but it never had a chance to get the respect it deserved. To finally, officially put that song out as a duet with a woman of color after all these years feels consequential to me.”

It also cuts to the very heart of what this record is all about, reaffirming that country and soul music are and always have been inextricably linked in ways that transcend whatever racial, social, and commercial divisions we’ve been sold through the decades. They are indeed two parts of the same stream, and Eli Paperboy Reed is here to baptize us in its waters.