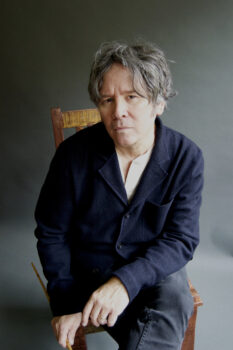 Grant-Lee Phillips – All That You Can Dream

When you’re a musician used to a certain creative groove, it’s disorienting to have this rhythm disrupted. But that was just the position Grant-Lee Phillips found himself in spring 2020: Months before the release of a new full-length, Lightning, Show Us Your Stuff — an album he was already previewing on an early 2020 tour with John Doe and Kristin Hersh — the pandemic led to the cancellation of tour dates and other promotional plans.

Like many musicians, Phillips sought out silver linings wherever he could find them. He started performing weekly at-home livestreams, dubbed Live from the Parlor, and promoted Lightning, Show Us Your Stuff from his house in Nashville. But in early 2021, when Phillips realized any potential touring options were still on hold for the foreseeable future, he started to write and record a new solo album at home. “I found respite in the process when I could do little else,” he says. “It became a sort of meditation on this time in my life and the events that we’ve collectively experienced.”

The resulting full-length, All That You Can Dream, is understandably introspective, as it’s anchored by Phillips’ empathetic voice and rich acoustic guitar. The album’s lyrics attempt to make sense of an uncertain, anxiety-riddled time, while coming to terms with the idea that once-unshakeable things now seem fragile or fallible. “In terms of subject matter, I found that the circumstances of being off the road, and left to reflect on what this time feels like, produced a different kind of song,” Phillips says. “I wasn’t entirely certain—and to be honest, I’m still not altogether certain—when I get to take these songs on the road. In some ways, that freed me up to write and record the kind of song that was personal and executed as though it were for an audience of myself alone. That’s freeing.”

Nevertheless, writing at home was admittedly an adjustment for Phillips, who was used to the solitude of songwriting while on the road. However, he still found inspiration in movement — he and his family took daily drives in the serene Tennessee countryside, marveling at turkey vultures and haphazard hay rolls — even as his songwriting turned toward global current events. “By and large, most of what you hear is me reacting to everything that we’ve gone through in this year, alone,” Phillips says. “The attack on the Capitol, making our way through this pandemic, and everything else.”

By coincidence, he found that some of the older songs he was working up for the album had similar thematic immediacy. The string-buoyed “A Sudden Place,” written in 2019 following the burning of the Notre Dame Cathedral, speaks to how quickly unshakeable monuments can crumble. The solemn, piano-driven “My Eyes Have Seen,” meanwhile, references the inhumane ways immigrants and asylum-seekers were treated at the southern border during the Trump administration, a troubling development that’s still not rectified.

“The only way that I know how to write is filtering whatever’s coming in from the outside from the social stimulus, and the direct personal stimulation of family and whatever’s going on internally,” Phillips says. “All of that gets thrown into the blender. We bring our work home with us and we bring our politics home with us—even if we never get the opportunity to leave home.”

All That You Can Dream is also rife with Phillips’ signature songwriting flourish: using rich historical references to illuminate modern truths. “I’m always juxtaposing the events that we’re all going through with similar events in history—sometimes laying one over the other to draw a comparison, to find parallels, to seek out patterns,” Phillips says. As an example, he cites the “Rats in a Barrel,” an unsparing condemnation of the January 6 insurrection at the Capitol Building with a specific nod to historical turmoil (“Old Lincoln saw it all go down/Almost looked like the first time ‘round”).

The album-closing “All by Heart” also cautions against historical complacency: “In our memories / We seek to find some meaning in the past / But do not think, for once / That grief is buried in the grass.” And the title track speaks to the idea that, as time has shown us, not everyone benefits from progress and forward motion. “All of us are engaged in a collective dream,” Phillips says. “In this dream, we have a choice between a world that’s hospitable or one that’s brutal. We face a struggle between the visionary and the cynical. In this way, there’s a dual meaning in ‘All That You Can Dream’—the possibility of betterment or the inevitably of collapse.”

In a nod to this lyrical elegance, All That You Can Dream‘s music is ornate but spare. Phillips wrote and arranged the album’s songs on guitar or piano, adding a basic rhythmic and vocal framework. To flesh out the music’s contours, he then enlisted a pair of trusted previous collaborators, the Los Angeles-based bassist Jennifer Condos and drummer Jay Bellerose. “They were going stir-crazy themselves and welcomed the idea of a long-distance recording project,” Phillips says. Bellerose set up drums in his living room, Condos served as engineer, and the duo laid down rhythm tracks to songs Phillips had sent over, as if the three musicians were all in the same room.

“I know that I have to bring my A-game when I work with them,” Phillips says. “That’s a personal thing where I feel like I don’t want to bring them my sketches—I want to bring them something that I feel really strongly about. I know they’ll be very respectful, and they’ll inspire me as well.”

Indeed, these songs inspired Phillips to layer on additional textures himself—for example, mellotron or pump organ—or enlist outside musicians to add keyboards, pedal steel or cello. “This more gradual kind of production allowed me to ruminate on the songs, to arrange parts for strings or keys,” he says. “While working at home imposed some restrictions, it pushed me to take the wheel as an engineer, mixer and producer. Consequently, so many nuances remain in the final mix, all the weird stuff that sometimes gets lost in the polishing stages of production.”

During the pandemic lockdown, he also started diving into another creative endeavor: painting. One example of his artwork, as seen on the All That You Can Dream‘s cover, depicts a well-loved pair of headphones spray-painted silver. Phillips has kept the pair for nearly 30 years; in fact, he wore them in photographs included in Mighty Joe Moon‘s booklet. To Phillips, the artwork signifies not just All That You Can Dream‘s interior vibe, but his own meditative past few years.

“My wife said the album is very dreamlike, and feels very internal and personal,” he says. “It’s the kind of record where when we were growing up, we probably would have enjoyed listening to it on headphones, going within ourselves. In some ways, maybe I was taking inventory of the arc of my work up to this point. There’s more to come, but I was taking a moment to reflect back on that person who I was.”

Maintaining this sturdy through-line between the past and present gives Phillips’ music emotional heft. All That You Can Dream is no exception. “I’m driven by the potential of making a connection,” he says. “Finding that place where the listener is able to engage by way of their own experience and what I’m bringing to the table. We’ve experienced some staggering events over the last year or so. When people speak of those things, it’s not enough to simply highlight or underline the headlines of the day. The aim is to tap into the feelings that we share that are trapped beneath our skin—and figure out how we expel those feelings by talking about them.”