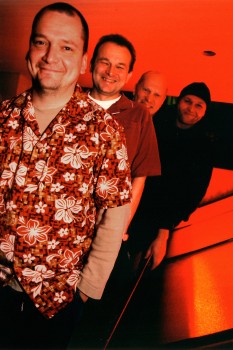 Laika & The Cosmonauts was founded in 1987 by Mikko Lankinen (guitar), Janne Haavisto (drums), Matti Pitsinki (organ and guitar) and Tom Nyman (bass). The Finnish instrumentalists’ first album,C’mon Do The Laika, was released in 1988. Since then, the band has released five more studio albums, all with the same line-up.

But the band’s popularity really took off after their music was introduced into the US, where they became legendary among the surf/garage/punk/alternative set for their otherworldly instrumental albums and mesmerizing live shows. In the states, Laika & The Cosmonauts have released three original CDs – Instruments of Terror, The Amazing Colossal Band andAbsurdistan – as well as a compilation of their early material from C’mon do the Laika andSurfs You Right!

These critically acclaimed releases brought Laika a good amount of radio airplay and won the admiration of music fans and musicians alike, including none other than “king of surf guitar” Dick Dale. Other musician fans include Mike Campbell and Benmont Tench of Tom Petty & The Heartbreakers fame, Mike Palm of surf-punk legends Agent Orange, and John Jorgenson of The Hellecasters.

Laika have toured the states six times, including a legendary stint supporting Chicago industrial rockers Ministry on the band’s “Filth Pig” tour. Ministry frontman Al Jourgensen, who invited Laika to join them on the stadium tour, has declared them “the best f**king band in the world!” (Check out the band’s live disc, Laika Sex Machine (2000), and you’ll understand why!)The band’s compositions have also been used in numerous films, including Flipper, LA Without A Map, Fox Hunt, Blood and Donuts and The Iron Horsemen. Since the band members are all big fans of movies and soundtrack albums, one of their main goals is to get their music on the big screen.

Overseas, Laika have done dozens of television appearances – including Absolut Live, which is shown throughout Europe and they’ve been featured on radio shows here and abroad. You might also recognize the band members from their work with such artists as Lemonator, Super, The JPs and Vïrttinï.

In 2008 the band will release the compilation Cosmopolis. This collection will celebrate not only the 20th anniversary of the band but the end of the Laika era as well. The band is lovingly calling it quits while the memories are still fond and the stages still warm. They will culminate the long amazing journey worthy of the Cosmonauts moniker with a US tour and their final gigs at their home away from home the fabulous Austin, TX landmark the Continental Club.

Cosmopolis is a surf, rock and jazz fueled trip through the past 20 years of Laika’s career and including material never before released in the US. Renowned for the technical prowess of their fuzz-drenched, tremolo-happy surf rock, Laika sounds like a 50s sci-fi film soundtrack interpreted by David Gilmour, andCosmopolis is no exception. The album also continues the band’s experimentation with elements of funk and world music, rendering sounds that would not be out of place on works by dj’s and producers like Thievery Corporation or Mark Farina. Weighing in at an astounding 27 tracks, the album is their most extensive work to date and promises to spread the word about Laika’s world class chops and mind-expanding sound to another generation of music lovers.