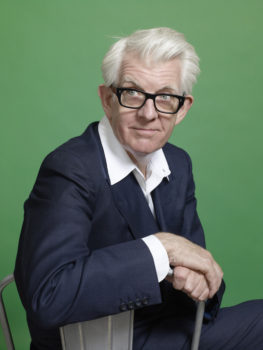 Three years ago, Nick Lowe had almost convinced himself that his days of making records were over. As detailed in a lengthy retrospective feature in Rolling Stone this past December, Lowe had ridden into 2018 astride a storied forty-plus year career as an artist, producer and one of the most-revered songwriters of his generation. But suddenly, the affable rocker-next-door felt he had to step back to take stock of his situation.

“I’d been dodging the thought of making more records for a few reasons,” Lowe says. “First, I’ve never been particularly prolific. I write songs all the time, but the thing about getting older is that I’m extremely self-critical. I can spend quite a long time fiddling around with some little two-and-a-half minute tune, then finally go, ‘Oh, I’ve heard this before so many times,’ and just drop it. So I wasn’t exactly laden with new material. Plus, to make the kind of records I know how to make is incredibly expensive. Never mind that nobody really buys records anymore. Also, the live thing is so easy to do now. You can travel in quite a degree of comfort and be nicely thanked for your efforts. So you think, ‘Why would I put myself through making another record?’”

But beyond those practical considerations, Lowe faced a larger emotional impasse – the untimely deaths of his two longtime creative partners, drummer Bobby Irwin and producer Neil Brockbank, in 2015 and 2017, respectively. Both had been with him since his career renaissance in the mid-1990s. “They were my two closest friends,” Lowe says. “The three of us were always able to discuss the work at hand without worry of offending each other. I miss that rapport, having somebody to say, ‘This is terrible’ or ‘This is great.’ Losing them really knocked me off my bike, and I thought, ‘I think I’ve sort of had enough of this. ‘

“And then along came the Straitjackets.”

2020 finds Lowe offering EP #3,  Lay It On Me, where he is once again joined by his gang of masked musicians, Los Straitjackets. The limited edition release features two new originals from Nick, “Lay It On Me Baby” and “Don’t Be Nice to Me,” alongside a cover of Dorsey Burnette’s “Here Comes That Feeling” (made famous by Brenda Lee). Nick’s wordplay and razor-sharp lyrics shine bright with the twang-friendly tones of Los Straitjackets behind him. Side B of the EP features Nick’s first production credit for another artist in over two decades, as he takes a turn behind the desk on Los Straitjackets’ scorching version of the Shocking Blue classic “Venus.”

The match that helped Lowe recapture his groove started casually in 2012 when he and the Straitjackets jammed at a party for their shared label, Yep Roc. “Apart from being a fantastic rock ‘n’ roll band,” Lowe says, “they know how to play tons of different styles really well. They can knock you out a version of Bacharach & David’s “The Look of Love” with no trouble at all. Plus, we get on with each other really well. And that makes the music work.”

Between 2014-18, the group accompanied Lowe on four well-received tours (two in support of his holiday disc Quality Street, one of Rolling Stone’s 40 Essential Christmas Albums). “This is a collaboration,” Lowe stresses. “They’re in no way my backing band. At first, they very kindly started learning up my records, note for note. I told them, ‘Don’t do that. Just learn the chords and we’ll play them together so it sounds as natural as we can make it.’ Rather than doing some kind of tribute band kind of act, you know? And that’s when it started being fun and click into gear.”

It also opened the door for new recordings. This time out, tracks were cut over a few days  at Sawhorse Studios in St. Louis, then mixed in London by Neil Brockbank’s young protegé Tuck Nelson. “Sessions these days are sort of on the hoof,” Lowe says. “They get tacked on to our tours, when we have a day off. We’ll go into a studio wherever we are and knock out a song or two. And very good fun it is too, to work like that. The songs are road-tested and ready to go.”

Though the quantity of songs released is smaller via these EPs, the quality is as high as ever. “Nowadays, I’m so fanatical about making sure that the song will work with just an acoustic guitar,” Lowe says. “I want it to be watertight, so you can play it fast, play it slow, change the key, mess around with it, but it’ll still work. If it passes that test, then it’s generally in.”

On a larger scale, his collaboration with Los Straitjackets speaks to the required fortitude and flexibility when you have a calling as deep as Nick Lowe’s for making pop music. “Even though I had those thoughts of not recording again, the truth is, you have to keep it coming,” he says. “It’s a tap that won’t turn off, really. Even if you don’t much feel like it. But now with the Straitjackets, there’s a new chapter. In the same way that I am totally used to them putting masks on before they go onstage, I’m used to what we’re becoming musically, as well. When we get together, I feel part of the group.”