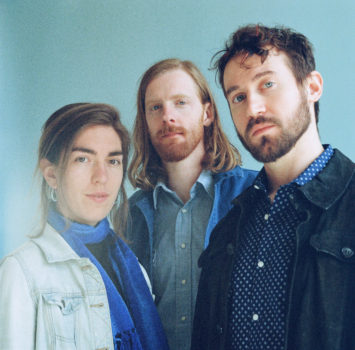 If The Stray Birds were going to make another album, there was only one way it would happen: together. The idea was at once a challenge, an ultimatum, and a survival mechanism for a band at the crossroads. Write the record collaboratively, or don’t write it at all.

“I felt like the only way forward was to write this album together and to be very intentional about it,” says fiddler/guitarist/banjoist/vocalist Maya de Vitry. “It wasn’t easy at times, but there’s something really sacred that we’ve built and grown between the three of us, and I was unwilling to move on without chasing it as far and as deep as we could.”

The result is ‘Let It Pass,’ The Stray Birds’ fourth album and their most powerful, personal, and cathartic collection yet. The record charts the trio’s tumultuous emotional journey in the years since the release of their acclaimed 2016 album ‘Magic Fire,’ a period which saw de Vitry and fiddler/guitarist/mandolinist/vocalist Oliver Craven end their romantic relationship while choosing to continue their musical one. Along with bassist/banjoist/vocalist Charlie Muench, the pair had to face down an uncertain future and reevaluate what it meant to create art together.

“The band was a huge part of all of our lives,” says Muench, “and suddenly there were all these question marks around it. How and why would we go on? The only thing that was clear was that if we were going to continue, it wasn’t going to be the same.”

Over the course of what totaled to nearly a month of dedicated writing sessions, the trio sat around a table and, for the first time, created an entire album from scratch. Where previously the band had been a showcase for the songwriting of de Vitry or Craven, here all three members brought fragments of melodies and sketches of verses, often generating music and lyrics together in real time. Every phrase, every word, every melodic turn and chord change had to travel through their collective imagination in order to make it to the page.

“I wanted everybody to experience wrestling with our collective state of mind and the uncertainty that goes into writing music together,” explains de Vitry. “It’s a delicate thing for people to create together like that, but seeing each other in our moments of frustration and in our creative breakthroughs created even more trust and possibility than we’d ever had before. It enabled us to peel everything back and make the most honest music we possibly could.”

Honesty and beauty have long been hallmarks of The Stray Birds’ catalog. Originally hailing from Lancaster, PA, the band first broke out in 2012 with their self-titled/self-released debut, which landed among NPR‘s Top Ten Folk/Americana Albums of the Year and earned the trio major festival performances everywhere from MerleFest to Scotland’s Celtic Connections. They followed it up in 2014 with ‘Best Medicine,’ which debuted at #2 on the Billboard Bluegrass chart, and returned two years later with the Larry Campbell-produced ‘Magic Fire,’ which hit #1 and earned an avalanche of critical praise. NPR hailed the band’s “warm harmonies” and “pristine playing,” while Pop Matters heralded the album as “an essential step forward,” and Folk Alley called it “masterfully crafted.”

With the addition of drums and outside musicians for the first time, ‘Magic Fire’ represented something of a new chapter for The Stray Birds, and that freshly fortified sound became a jumping off point for the exhilarating performances and infectious hooks on ‘Let It Pass.’ Drawing more than ever before on electric guitars and rhythmic propulsion, the record channels the dynamic energy of the band’s live shows, capturing raw, emotional performances that are equally as meticulous as they are spontaneous. Producer Dan Knobler (Lake Street Dive, Erin Rae) brought the band into the famed Sound Emporium studio in their adopted home of Nashville, where he pushed them to embrace the grittier, more rocking side of their songwriting and to close the daylight between their studio and stage identities.

“Dan was really onboard with our need to write the album collaboratively as a trio,” says Craven, “but he also got really involved with our rehearsals and was very hands on when it came to bringing the songs to life. We got together with him and our drummer, Dominic Billett, several times to really work through all of the arrangements in a way that was new for us.”

Unlike with previous records, the band also took the new material on the road to Folk Alliance for a series of intimate live performances, which provided a unique opportunity to step inside the songs and truly live them before recording began.

“Playing the new songs live was an important step for us,” says de Vitry. “As soon as you’re performing a song in front of an audience, it becomes all about communication, about tapping into the lyrics and the feeling. It requires another kind of vulnerability, and it was something we needed to do completely on our own terms.”

By the time the band hit the studio, they’d explored the material so thoroughly and honed their performances so tightly that recording sessions were wrapped in just five days. Album opener “The Bridge” says it all, with de Vitry, Craven, and Muench joining in ecstatic harmony to sing, “Meet me on the bridge / We can watch the water / Meet me on the bridge / Water running under.” Like so much of the album, it’s a cry for empathy and compromise that works on a variety of levels: personal, professional, political. The Stray Birds take an unflinching look at themselves in the mirror with this record, but it’s not hard to zoom out and hear the parallels here with a divided nation similarly navigating its way through a metaphorical maelstrom.

“For me, even the most meaningful and lasting relationships have moments when people find themselves asking. ‘What are we doing here?’ and ‘How did we get this way?’” reflects Muench. “‘The Bridge’ is about that moment in any relationship, whether it’s a romantic couple or a group of friends or a broader society, where you look at each other and say, ‘How do we go forward together from here?’”

From the lilting “In My Time” and gentle “Light As A Fire” to the gritty “Miles and Miles” and sentimental “If Time Is Not Enough,” change and continuation are frequent themes on the album, but each track boils down in its own way to an act of growth and healing. On the tender “Better Than Bone,” de Vitry suggests that the power to carry on in the face of sorrow or loss comes not from anger but forgiveness, proclaiming, “I’ll be as strong as all the love I’ve ever known / All the love I’ve ever shown.” It’s precisely the reason she felt so passionately that the band needed to write (and experience the writing of) this album together.

“There can be such a sense of loss at the end of any relationship, a sense that the time and energy and emotion that went into it was wasted because you have to start over,” says de Vitry. “But it’s all worthwhile, and it’s all a part of this journey. Loss actually creates room for growth and strength.”

That sentiment is ultimately at the heart of the album. If we can accept each other and ourselves for who we truly are, if we can live in our pain as much as our joy and recognize that both contain equal potential for evolution and self-discovery, if we can step out onto that bridge and see the beauty in the endless flow of water running underneath, then we’re going to be just fine. It might not always be easy, and it might not always be fun, but the rewards will far outweigh the struggle. Darkness will give way to new dawns, endings will give way to new beginnings. “Hold it to the light and let it pass,” Craven sings on the album, as much to himself and his bandmates as anyone else out there listening, looking for answers in a world that keeps on spinning.