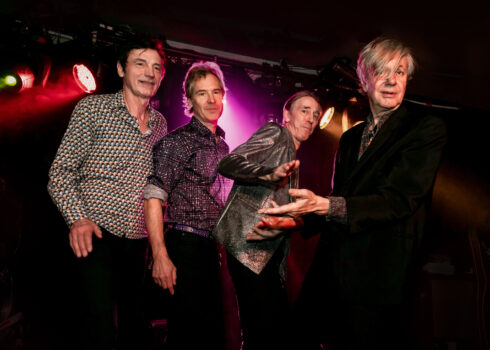 and their scary-good new record,

FACE OF THE SCREAMING WEREWOLF

In a world where there are no more heroes, the Fleshtones walk the earth like Roman gods.

Since their inception in 1976 in Queens, New York, and their sweaty, boozy gestation at legendary venues such as CBGB, Max’s Kansas City, and the storied Club 57— recently feted at the Museum of Modern Art, where their proto-video underground film“Soul City” was unspooled for art stars, glitterati, and a raft of punk rockers who managed to get past the front gate — they have perpetrated their proprietary brand of SUPER ROCK, a frenetic amalgam of garage punk and soul, punctuated by the big beat and unleashed with the spectacular show business majesty which has kept them on the road for over forty years, adored by audiences whose love for them borders on religious fervor.

And yet their new record, Face of the Screaming Werewolf, has charted faster than any of their previous twenty or so releases, hitting Billboard’s Top 50 in half a dozen categories including, oddly, the Top Ten of “Alternative New Artists,” which just proves, again, that SUPER ROCK shows no signs of wear and tear.

Face of the Screaming Werewolf is a smash that could have dropped at any point in their epic career — it is an outburst, and a celebration of the SUPER ROCK sound.  Unlike erstwhile pioneers the Rolling Stones, they have not dialed down the tempos to compensate for osteoporosis, they have not lost anything on their fastball, and continue to throw it for strikes.

The secret to the Fleshtones’ success has been never copping the sound of another era — the closest they come is an uncanny ability to look good in paisley — while barely acknowledging the times in which they live.

On Face of the Screaming Werewolf, the Fleshtones remain an unstoppable force for good. They brooked no false meanness, studied cynicism, arty ennui, or the lyrics of the jaded. Songs like “Swinging Planet X” fulfill the promise of Bo Diddley-style outer-space blues stomp, while “Spilling Blood at the Rock’n’Roll Show” splatters happily, fueled by stinging guitars and group hollers. Add to this a jangly ode to the most peerless of game show hosts, Alex Trebek, and a half dozen more songs dusted with British Invasion harmonies and touches of dirty psychedelia —  including the title track, inspired by one of the greatest, unsung films of our time — all delivered with the Fleshtones’ indelible mojo, and you are holding a slab truly worthy of the SUPER ROCK championship belt.

Their records aren’t throwbacks — the Fleshtones aren’t rediscovering rock’n’roll any more than Mike Tyson was rediscovering boxing just because he had his hair cut like Joe Louis. Tyson’s truth lay in a freight train of a right hook, and if he looked good for the knock-out punch, if he was a heavyweight champion with style, then so it goes for the Fleshtones, whose off-hand charm, polished nightclub act, and dance appeal did not replace primal rock’n’roll as the coin of their realm, it just inflated its value.

The Fleshtones’ SUPER ROCK sound literally defines American Beat Music, and they have delivered their message with evangelistic passion, always skirting the edges of  the mainstream without pandering to any obvious fad or trend. They have appeared on Dick Clark’s American Bandstand TV show; charismatic frontman Peter Zaremba was a host on MTV’s original late-night alternative broadcast The Cutting Edge; and they were the last band to publicly perform at the World Trade Center’s Windows on the World, a society gig by any standard. Always true to their school, they have flags planted in the old world and the new — they appeared with Andy Warhol on his short-lived talk show Andy Warhol’s Fifteen Minutes, and throughout the mid-1980s they regularly played at the Pyramid Club on Avenue A in New York’s storied East Village, and were instrumental in helping to start Wigstock, the drag queen festival that has become an outrageously vibrant part of the New York City experience.

Never as obviously demented nor self-consciously “psycho” as the Cramps (with whom they shared a rehearsal space in 1977), the Fleshtones could also be found after dark basking in the sick blue light of their television sets, watching late-night horror movies and basking in the weirdness of America, while simultaneously soaking up the on-stage outrages of the Rat Pack, Little Richard, and the Rolling Stones, honing their own live show into an explosive, frenzied manifesto of rock’n’roll gone right.

They routinely tour Spain, where fans make pilgrimages to their shows, and they are equally heralded in Scandinavia, in Italy, and in France, where they have toured incessantly. All over the world — and especially in New York City, the most fickle of towns — younger bands look up to the Fleshtones for lessons in suave stagecraft and unforced enthusiasm. They bring the brio of Chuck Berry and James Brown, with whom they have shared the stage with many times, and the true spirit of CBGB.

In fact, they are the only band who played at CBGB in 1976 to have never taken a significant break from recording or performing since, and their line-up has been remarkably stable, anchored by Zaremba — wildly swinging, funny, uncompromised, and confident, he is equal parts Dean Martin, Mick Jagger, and Count Dracula — and SUPER ROCK guitarist Keith Streng, who seemingly flies through the air. They are backed by one of the most solid rhythm sections in the world, the decidedly Charlie Watts less-is-more-but-do-it-with-panache drumming of Bill Milhizer, who’s held the chair for forty years, and newcomer Ken Fox on bass, who has served for a mere thirty. Previously, those spots had been filled my luminary mercenaries with pedigree, including Clem Burke from Blondie on drums, and Fred Smith (Television) and Andy Shernoff (the Dictators) on bass, testimony to the Fleshtones OG punk rock roots and authenticity in a world run over by poseurs and off-the-rack frauds.

The Fleshtones were always oddly evolved in a plasma pool of retrograde wannabes — this is band that promises a party of the least-juvenile sort. And that is why they have proudly worn the SUPER ROCK title since they came howling and gyrating out of the gate. They are the rare thing, like the Grand Canyon –   no matter how great you have been told they are , when you finally get to see them for yourself,  it is actually much better than any hype.

Evel Knievel once told me that “American hero” is the shortest lived of all professions. The Fleshtones are here to tell everyone he was wrong. The Fleshtones stand tall as the last real thing in America.

Stare into the Face of the Screaming Werewolf.