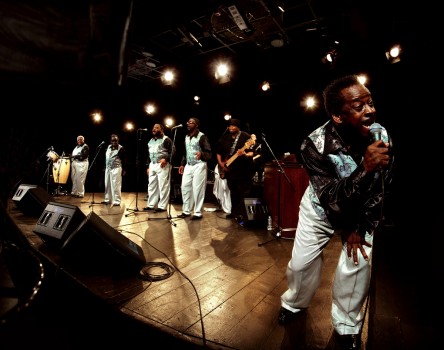 Call it Gospel Funk! Or, Psychedelic-Gospel-R&B. In truth, the sound of The Relatives is so much more. Formed in 1970 by veteran Dallas Gospel singer Rev. Gean West and his brother Tommie, The Relatives’ sound bridges the gap between traditional Gospel, Soul and Psychedelia. In the early 1970’s, they recorded three obscure singles and a previously unreleased session—all of which are compiled on the acclaimed 2009 anthology, Don’t Let Me Fall (Heavy Light Records). The release of the anthology brought The Relatives back together as a band, planting the seeds for their 2013 Yep Roc release, The Electric Word, which was recorded and produced in Austin, TX by Jim Eno of Spoon.

The Relatives are spawned from the same fervent Pentecostal tradition that begat Elder Utah Smith. In the 1950’s and 60’s, the West family were Dallas Gospel royalty and often hosted traveling musicians, including a young Aretha Franklin, The Staple Singers, Lou Rawls, and O.V. Wright. Rev. Tommie recalls climbing a tree to watch Soul Stirrer Sam Cooke play guitar and sing on their front porch. When Rev. Gean returned home from 1970 tour, a young Tommie had written a song in a new voice influenced as much by traditional Gospel quartets as it was James Brown and Hendrix. “Speak to Me (What’s Wrong With America?)” marked the beginning of The Relatives and a new musical direction, dubbed the “Street Sound” by Rev. Gean. The group quickly realized that their contemporary sound would get them bookings in nightclubs as well as churches. As Rev. Gean says, “If the people won’t come to church, we’ll bring church to the people.”

The Relatives spent the 1970’s touring nationwide and pressing small batches of 45 rpm singles that did well regionally, but never made a splash outside of North Texas. Known for their powerful original songs and searing stage show, their reputation survived the 1970’s, but the group did not, recording their final session with legendary engineer Phil York in 1975 and disbanding in 1980. Rev. Tommie founded his No Walls Ministries, while Rev. Gean continued to manage touring Gospel artists, founded his own church and hosted a popular radio show on Dallas’ KKDA, “Soul 73 AM.” With only a cracked copy of The Relatives’ “Don’t Let Me Fall” single to go on, Heavy Light Records located Rev. Gean in 2009 and began the process of reissuing The Relatives’ vintage recordings. Rev. Gean calls The Relatives’ rediscovery and resurgence, “nothing short of a miracle.”

After a stunning, sold-out 2009 reunion performance at the Continental Club in Austin, The Relatives began performing regularly again, barnstorming major festivals and venues worldwide, taking their incredible stage show and four-part harmonies to Lincoln Center, ACL Fest, Bonnaroo and Splendour in the Grass. Summer 2011 found the group in southern France, where they appeared at the Cognac Blues Passions festival, collaborating with a 30-member French community choir for an impassioned performance of Relatives originals. 2011 also saw The Relatives combine forces with Garage/Soul powerhouse Black Joe Lewis & the Honeybears to record “You Been Lyin,” which appears on the BJL album Scandalous. Their Austin City Limits TV taping with Black Joe Lewis has been called “one of the best we’ve ever seen” by longtime ACL staff and fans.

Picking up BJL’s drummer and guitarist/musical director as full-time members, The Relatives cut the The Electric Word, their first recording in over 30 years, in the summer of 2012 with Jim Eno at Public Hi-Fi Studios in Austin, TX. Still helmed by the West brothers, The Relatives‘ current incarnation is the most powerful generation of this musical family to date.

“Maybe the world wasn’t ready for the Relatives when they first formed, but
today they combine sweat, grit, and a righteous musicality in a manner that’s
unequaled.” – AUSTIN CHRONICLE

“The Relatives are the heroes America needs, even if we don’t deserve them.”
Dean Blackwood, Revenant Records

“The Relatives are Jesus on LSD.”
Leo Sacks, producer, filmmaker