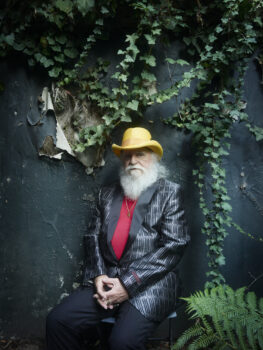 Yep Roc Records announces that Tommy McLain, a founding father of the swamp pop genre, has joined the label’s esteemed artist roster. Later this year, the South Louisiana-based legend – who turned 82 on March 15 but always celebrates through St. Patrick’s Day – will release his first album in over four decades, featuring new, original songs and a number of special guests. McLain’s return to the spotlight has already begun, as he’ll perform at SXSW, New Orleans Jazz & Heritage Festival, and more in the coming weeks, followed by a run of dates supporting new labelmates Nick Lowe and Los Straitjackets in June.  See below for a full list of upcoming shows.

Yep Roc co-founder Glenn Dicker says, “We are truly honored to be the new recording home for Tommy as his music has been so meaningful to us. And by that I mean we’re ready for the party! I cannot think of a better time than now to be hearing Tommy sing his songs and tell his stories. Stir up the good vibes as there’s plenty to go around!”

McLain adds, “In Texas, they’ve got Willie. In Louisiana, it’s always been Tommy McLain; but with Yep Roc, I’m looking forward to finally getting my music and these songs I’ve written out to the world. It’s gonna be good…God’s already told me so. Hell, we might just make Swamp Pop-ular.”

Born in Jonesville, Louisiana, on March 15, 1940, Tommy McLain was influenced by the sounds of Little Richard, Fats Domino, and Ernest Tubb at a young age. He took those influences and developed his own brand of “swamp pop,” combining rhythm and blues, country and western, gospel, and traditional French Louisiana musical stylings into something truly unique. This signature swamp pop sound spread throughout Louisiana and the nation and inspired artists like Creedence Clearwater Revival, Little Feat, and Tony Joe White, among others.

Tommy McLain started his own musical career while still in high school in Pineville, Louisiana, forming a trio that played area nightclubs. In 1965, he recorded his version of the Don Gibson-penned classic “Sweet Dreams” on a borrowed tape recorder and had 500 45rpm copies pressed up. It would eventually earn him a gold record, and while other artists, including Patsy Cline and Emmylou Harris, had success with the song, Tommy’s recording remains the highest-charting version of “Sweet Dreams” and the only one ever to crack the Billboard Top 20. He would subsequently record other classics such as “Before I Grow Too Old” and “Try To Find Another Man,” which to this day are considered cornerstones of the swamp pop sound.

Tommy has toured the world over with numerous high-profile acts, including Sam Cooke, Otis Redding, The Yardbirds, ZZ Top, and more. He’s been inducted into the Louisiana Music Hall of Fame (twice!), earned a gold record for writing “If You Don’t Love Me (Why Don’t You Just Leave Me Alone)” for Freddy Fender, and even appeared – as himself – in the 1975 Paul Newman thriller The Drowning Pool.

Sign up for Tommy’s email list HERE to stay in the loop for new music, tour dates and more.