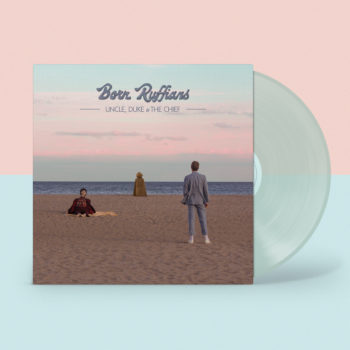 Born Ruffians just announced their new album Uncle, Duke & The Chief, along with their new single Forget Me!

Bundle Uncle, Duke & The Chief with RUFF and Birthmarks to save 25% on your purchase!

All Pre-Orders oome with a 12×12 poster signed by the band! LPs feature limited edition clear vinyl.

Produced by Richard Swift (Foxygen, The Shins), Uncle, Duke & The Chief is a record less concerned with what sounds hip than what feels good. In the Ruffians’ case that meant shedding some of their more arty influences (the Pixies, Talking Heads) and reconnecting with the sounds they first heard on their parents’ turntables as kids: Buddy Holly, The Everly Brothers, and pre-psychedelic Beatles. “It’s about going back to the deepest, most satisfying itch to scratch,” says lead singer Luke Lalonde. And in doing so, the album takes you back to a time when the Ruffians sounded less like a band and more like a gang, raising a wild ruckus and speaking in telepathic tongues.

Watch the official video for single “Forget Me” below!