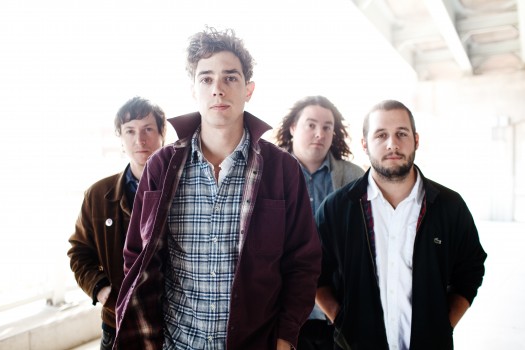 Born Ruffians will embark on a 12 date US tour this fall. On the heels of their release Birthmarks in April of this year, the band has been touring and recently filmed a video for their single, “Needle.” SPIN will be hosting an exclusive premiere of the video today. Visit HERE to view, or watch in the player below.

Luke Lalonde says of the “Needle”, “The beauty of anonymity is basically the subject of ‘Needle.’ The song mostly centers around the ‘needle in the hay’ as a thing. I think ‘Needle’ and some other songs on Birthmarks are self-reflexive as far as my life and identity as a musician in a band. ‘Needle,’ to me, is really about being out of the game for a bit and losing touch with that identity in a good way. I think moving through your mid-twenties and not really doing what other people your age might be doing, or what a lot of people my age feel like they should be doing – like a PhD, or buying a house, or having a real job with a salary and benefits – is a bit like the needle falling through the haystack and losing the more youthful ‘the world is my oyster’ feeling. It’s about finding a way to belong in the landscape of music and also just in my life.”

The video for “Needle” was directed by Istoica in collaboration with James Cooper, who says, “We like the idea of the performer being mirrored in the audience. We shot the video over several days in New York City. We followed Luke Lalonde around New York in big crowds of people, smaller groups of friends and on his own. The video takes place over a night out in New York so we left some things up to chance and kind of followed wherever the night took us. Much of the video was shot as stills and later morphed together to create a look that feels like a past memory being recalled.”