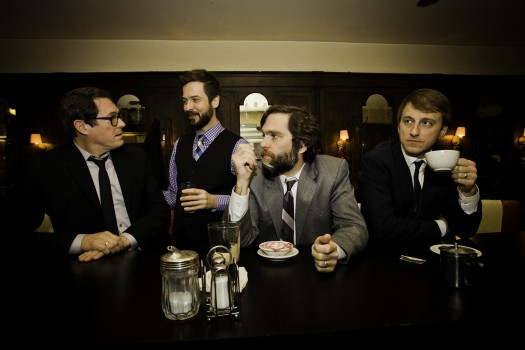 Chatham County Line To Release New Album Tightrope in May

Stirring, provocative, and disarmingly poignant, Tightrope was born out of a year’s worth of intense focus, during which the band examined their own legacy while carefully honing new material. All the while, the band’s four members – Dave Wilson (guitar), John Teer (mandolin, fiddle), Chandler Holt (banjo), and Greg Readling (bass, pedal steel, piano) – welcomed spontaneity and the sometimes palpable will of the songs themselves into the process.

“At the end of the day,” Dave Wilson says, “you really want to write songs that have a reason for existing. For Tightrope, we worked together very closely on every decision and every word and every bit of everything to try to make it fit. We want every song to be on the greatest hits or the live album.”

Recorded at Sound Pure Studios in Durham, NC and produced by Wilson and Chatham County Line, Tightrope benefits from an unusually rich, resonant sound that blends each member’s contributions into a powerful, dynamic whole. The  poetic insight of the album’s eleven original songs is grounded by Chatham County Line’s ongoing commitment to classic stringband instrumentation.

Listen to the band’s new song, “Any Port in a Storm,” from Tightrope in the player below, in addition to track listings and tour dates.