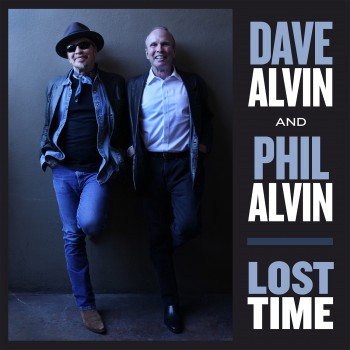 Dave Alvin and Phil Alvin reunited in 2014 for their first album together in over 30 years, titled Common Ground Dave Alvin & Phil Alvin Sing the Songs of Big Bill Broonzy.  The album received praise from both critics and peers earning a Best Blues Album Grammy nomination and a Blues Music Award nomination for Best Traditional Blues album. Over ‘Lost Time’s’ twelve tracks, Dave and Phil pay homage to a number of artists and songs that had an early, formative influence, in Dave’s words “the masters of the Blues, the most transcendental form of American music.  This time around, the guitars are cranked up, as is the energy.  This release further solidifies their legacy, while establishing Dave and Phil as true blues artists, with a clear understanding and appreciation of the genre and the talent and skills to stand among the best artists recording the blues today.

“We tried our best to honor all these magnificent musicians, songwriters and singers as well as expose them to new listeners, and perhaps raise some ghosts up from their graves for a minute or two,” says Dave Alvin. “And, hopefully, my brother and I have also again found some damn lost time.”

Head to The Wall Street Journal’s Speakeasy to hear the first single from Lost Time, “World’s In A Bad Condition.”

Pre-order right now to receive an instant download of “World’s In A Bad Condition,” or receive 20% off with the exclusive poster and t-shirt bundle.