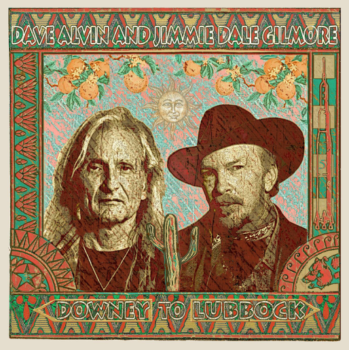 On Downey To Lubbock, roots music legends Dave Alvin and Jimmie Dale Gilmore come together to explore the thousand miles that separate their worlds and all the common ground that lies within. Named for their hometowns in Southern California and West Texas respectively, the record’s song selections are part road map and part love letter: tributes to mutual heroes, friends gone too soon and lifetimes spent on the highway “living off dreams and gasoline.” Spanning nearly a century of material, the twelve-song collection is out today on Yep Roc Records.

From an early feature in the LA Times to an extensive release week profile in the Austin American-Statesman, Alvin and Gilmore’s debut collaboration has garnered universal praise from Downey to Lubbock and just about everywhere else. The pair will tour together through the remainder of 2018, including sold-out shows at New York’s City Winery (June 8) and Los Angeles’ Troubadour (July 27). See below for a full list of dates.

Praise For Downey To Lubbock:

“An alternatively sweet, touching, rousing and undeniably heartfelt set that plays to both artist’s strengths.” – American Songwriter (4 out of 5 stars)

“Dave Alvin and Jimmie Dale Gilmore fit together like brothers separated at birth…it’s comfort food for body and soul.” – No Depression

“This pairing not only works – it’s downright riveting…perhaps this was predestined. In any case, it succeeds marvelously.” – Glide (9 out of 10)

“Their pairing feels almost perfect…both men have such a rich history of music on their own, and a deep well of songs to pull from that it’s staggering.” – Houston Press