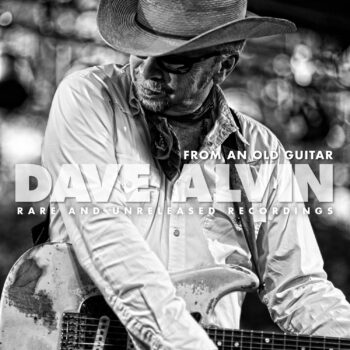 Dave Alvin to Release ‘From An Old Guitar: Rare and Unreleased Recordings’ on November 20

Dave Alvin will release From An Old Guitar: Rare and Unreleased Recordings November 20!

The 16-song collection features songs recorded over the years for his own records and tribute albums, but “the majority were recorded for no other reason at all than the sheer kicks of going into a recording studio to make some joyous noise with musicians and singers that I love and admire,” offers Alvin.

Check out the new single, “Peace”:

Produced by Dave Alvin, From An Old Guitar: Rare and Unreleased Recordings offers a mix of acoustic blues and ballads to electric bar room blues to folk and country/rock. The album features songs written by Alvin as well as one’s written Alvin’s dear friends like Peter Case, Bill Morrissey and Chris Smither, as well as heroes like Willie Dixon, Bob Dylan, Earl Hooker, Doug Sahm, Lil’ Hardin Armstrong, Marty Robbins and Bo Carter. There are also contributions from dearly departed comrades like Chris Gaffney, Amy Farris and Bobby Lloyd Hicks as well as from old Blasters pals like Gene Taylor along with various members of The Guilty Men/Women/Ones.

“If I had a few extra bucks in my pocket, I’d book a day in the studio, call some old (or new) friends, comrades and co-conspirators to join me and see what would happen,” notes Alvin, “no pressure, no expectations, just making music for the transcendental thrill of, well, making music.” The brilliant accompanists joining Alvin in-studio include Greg Leisz, Cindy Cashdollar, Bob Glaub, Don Heffington, Christy McWilson, Danny Ott, Dale Spalding, and Cindy Wasserman.

“I consider myself extremely lucky to have had such a stellar collection of musicians to make some noise with and to say that I’m proud of the performances on this release would be a gigantic understatement,” adds Alvin. “And, yeah, of course I played beat up, old guitars on all the songs. I sincerely hope you enjoy these songs (and the musicians/singers bringing them to life). These recordings may be rare, unreleased or little heard but I’m very proud of them and they hold a very special, warm place in my heart. Just like my old guitars.”

4. Amanda (from A Tribute to Waylon Jennings)

8. On The Way Downtown (from A Case For Case – Peter Case tribute)

10. Krazy and Ignatz (released only on Yep Roc’s web store)

12. Man Walks Among Us (released only on Yep Roc’s web store)