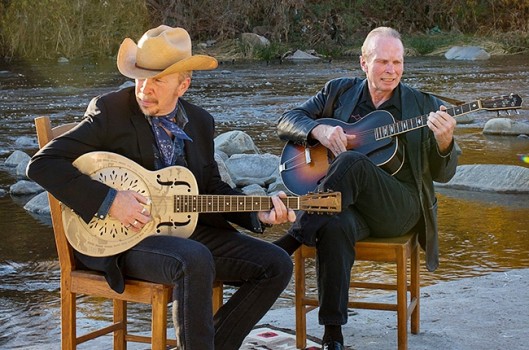 The upcoming Alvin brothers album, Common Ground: Dave Alvin + Phil Alvin Play and Sing the Songs of Big Bill Broonzy will be released June 3rd.  This will be the first album the brothers have made together in almost 30 years.

“We argue sometimes, but we never argue about Big Bill Broonzy,” says Dave Alvin when explaining why he and brother Phil were inspired to record Common Ground. The Alvin brothers, who founded seminal early LA punk roots band The Blasters in 1979, have shared a fascination with Broonzy since childhood.  After an illness nearly took Phil’s life in 2012, they resolved to return to the studio and pay tribute to the blues legend.

Common Ground includes 12 songs that capture a 30-year cross section of Broonzy’s canon, performed by the Alvins’ in their signature style of rollicking roots and stomping country blues.

“He looked so slick,” says Phil about the cover of his first Broonzy album, which he purchased in a department store at age 12.  Dave agrees, “I remember the day Phil brought that record home.  It’s a strong childhood memory – like stealing a Playboy for the first time.”

The Alvins’ interpretations of Big Bill range from faithful to loose and Dave and Phil both play guitar and sing.  They are joined on some tracks by Dave’s band members Lisa Pankratz (drums) and Brad Fordham (bass) as well as The Blasters’ pianist Gene Taylor.  Other tracks feature noted session musicians Bob Glaub (bass) and Don Heffington (drums).  All tracks were recorded at Winslow Court Studios in Los Angeles, CA.

Though this is their first album together in decades, the Alvin brothers collaborated last year on ‘Ghost Brothers of Darkland County,’ the critically acclaimed “southern gothic supernatural musical” by Stephen King, John Mellencamp and T Bone Burnett.  They also sang a duet on “What’s Up With Your Brother” for Dave’s last Yep Roc release ‘Eleven/Eleven.’

Dave and Phil will tour extensively in 2014, including dates with the popular Roots on Rails series in April.  A Record Store Day exclusive release of four songs from ‘Common Ground’ cut at 45RPM on two 10-inch records packaged as a 78-style album book will also be available via Yep Roc on April 19.

Catch the exclusive Billboard premiere of their track “All By Myself” at the Billboard website or in the player below.