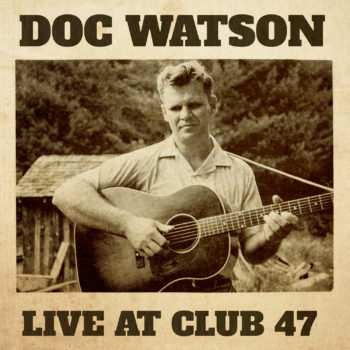 Yep Roc Records and the Southern Folklife Collection at the University of North Carolina at Chapel Hill Libraries announce the release of Doc Watson, Live at Club 47, set for a February 9 release on CD and digital, nearly 55 years to the date of the original recording. The LP release will follow April 27. The album is now available for pre-order.

Recorded live February 10, 1963 at Club 47 in Cambridge, MA, today known as Club Passim, this never-before-heard album features four previously unreleased songs from Doc’s early repertoire, in addition to performances of Doc’s favorite songs of the Carter Family, Frank Hutchison, Charlie Poole, and Merle Travis. Doc is accompanied by John Herald and Ralph Rinzler of The Greenbrier Boys on five of the album’s tracks.

In celebration of the release, Club Passim, the UNC Libraries’ Southern Folklife Collection and Yep Roc Records present an evening with songwriter, multi-instrumentalist, and IBMA guitarist of the year Molly Tuttle February 13. Tickets are on sale and available here.

“This recording documents a pivotal moment in virtuoso Doc Watson’s early solo career,” notes Steven Weiss, director of the Southern Folklife Collection. “This is Doc, paying his dues and playing his heart out, performing two sets of classic, old-time country songs he learned as a child from his family and from old 78 RPM records.”

Following the success of the Club 47 show, Doc was booked at the 1963 Newport Folk Festival and released his debut solo album on Vanguard Records in 1964. He went on to become America’s premier folk guitarist earning seven Grammy Awards, a Lifetime Achievement Award from the National Academy of Recording Arts & Sciences, and in 1997 was presented with the National Medal of Arts at the White House by then-President Bill Clinton, who introduced him saying, “There may not be a serious, committed baby boomer alive who didn’t spend at least some of his or her youth trying to learn to pick guitar like Doc Watson.”