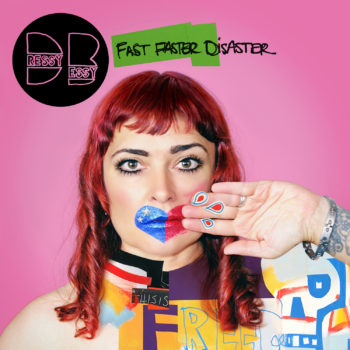 In support of the album, the band kicks off a seven-date run supporting Filthy Friends beginning May 17, at the 40 Watt Club in Athens, GA. Two Denver release shows are planned June 14-15 at the legendary Lion’s Lair with Potty Mouth. More dates will be announced soon.

Produced and engineered by Ealom and Hill and recorded at their home studio, the 12-track set features engaging new tunes like “It’s Not That Hard,” “Fearless,” “Cheer Up Teardrop” and “Stay True” that reflect on universal emotional foibles with the same pointed insight that Ealom has brought to her lyrics since the band’s early days as iconoclastic indie pop darlings.

“Tiny Lil’ Robots” and “Sweet Medicine” were inspired by Tammy’s relationship with her daughter, while “Mon Cheri” was sparked by the emotions that accompanied the sudden death of Dressy Bessy’s original bass player Rob Greene in January 2018. Also on the new collection, the bittersweet “The Real McCoy” pays heartfelt tribute to longtime friend and label mate (The Minus Five/Young Fresh Fellows leader) Scott McCaughey, who had suffered a stroke at the time the song was written.

“I think this is our best album yet,” Tammy assesses. “There’s an undeniable sense of honesty and freedom to it, lyrically and sonically, and it came with a humbling ease. We pay close attention to current events, including politics, and have been profoundly impacted by the recent climate. There’s nothing like the threat of losing your basic freedoms and realizing the fragility of democracy to open up your eyes and pull you out of your personal bubble. More than ever, we’ve come to appreciate the importance of family, friends and community.”

The album is now available for pre-order.