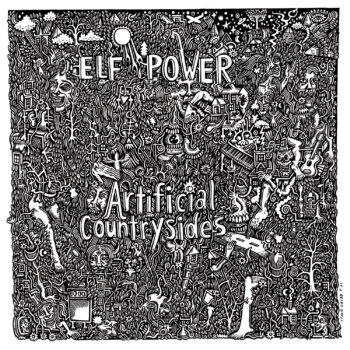 Today, the Athens, GA-based psychedelic folk band Elf Power announced their first new album in more than 5 years, Artificial Countrysides. The album will be released on July 15 and marks their first release for Yep Rec Records. The band has released the official video for the album’s first single “Undigested Parts,” which was filmed by Alex Pfannkuche at the Orange Twin Conservation Community stage and features Robert Schneider of The Apples In Stereo as the lone audience member. Artificial Countrysides is now available for pre-order and the band has announced a summer tour that will make stops in Chicago, Philadelphia, New York, Atlanta and more. Find a full list of tour dates below or at elfpower.com.

Singer and multi-instrumentalist Andrew Rieger describes “Undigested Parts” as, “A song about the way that unprocessed events and emotions can erupt at unexpected times. Musically, it’s a mixture of incredibly fuzzed out guitars, ethereal keyboards, pounding drums and drum machine combined together, and a sweetly melodic vocal line, resulting in an interesting mix of elements.”

Artificial Countrysides, the band’s 14th album in an almost 30 year career, centers around the gray zones where the natural world collides with the creeping encroachment of the digital realm, where the balance between real and simulated can shift from one minute to the next. “That title also describes the songwriting process, of world-building or creating an artificial landscape within a song,” explains Rieger.

Rieger and his Elf Power bandmates — drummer Peter Alvanos and guitarist Dave Wrathgabar, with contributions from keyboard player Laura Carter — have created some of the band’s most expansive musical terrain yet. Along with a blend of fuzz-tone electric and layered acoustic guitars, Moog keyboards and lively drums, the group experimented with the sounds of marimba, Mellotron, harpsichord, synth bass and distorted drum machine loops, taking a try-it-and-see approach to recording in the studio.

“I like the challenge of approaching it as a trial-and-error process, so we can spend more time and see what works and what doesn’t,” Rieger says. “We build the songs as we’re coming up with them, instead of rehearsing it to death and then recording it. I’ve always felt like that makes for more interesting music for us.”