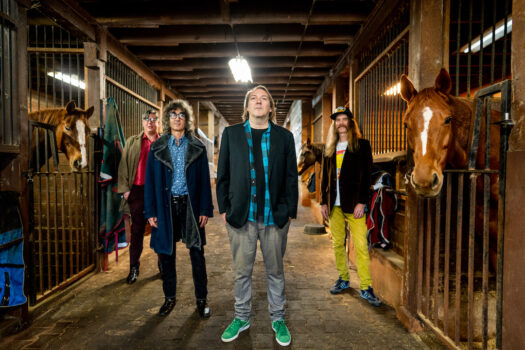 Today, the Athens, GA-based psychedelic folk band Elf Power released the official video for the title track to their forthcoming album Artificial Countrysides that will be released on July 15 via Yep Roc Records. The video was directed and filmed by Dickie Cox. The band will kick off their summer tour on July 13 in Milwaukee, WI  and will make stops in Philadelphia, New York, Atlanta and more. Find a full list of tour dates below or at elfpower.com.

“The title track lyrically addresses the songwriting process, and the creation of miniature worlds within songs, propelled by a frantically fingerpicked acoustic guitar line that imagines what acoustic guitar virtuoso John Fahey might sound like if he played with a rock band,” explains singer and multi-instrumentalist Andrew Rieger.

The new song followers the release of the official video for “Undigested Parts” and “The Gas Inside The Tank,” which was covered by Stereogum, Under The Radar and BrooklynVegan, who said “It finds their unique psychedelic pop/indie rock fusion sounding as great as ever.”