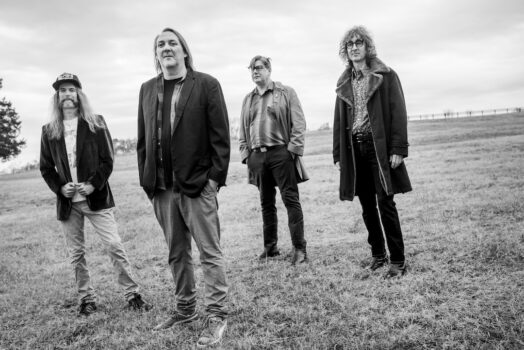 Elf Power Signs to Yep Roc! Hear Their New Single: “The Gas Inside The Tank”

Today, the Athens, GA-based psychedelic folk band Elf Power announced they have signed with Yep Roc Records. To celebrate the partnership, the band released “The Gas Inside The Tank,” their first single release since 2017’s full length album Twitching in Time.

“‘The Gas Inside the Tank’ lyrically touches on seemingly separate but interrelated themes such as reincarnation, evolution, digital information overload, and an imagined post-apocalyptic future world of deserted cities in which inhabitants resort to siphoning gas from abandoned vehicles,” explains Andrew Rieger. “This was the first song written for an album we’ll be releasing later this year. It mixes organic and artificial elements together, with drums and drum machine mixed together, and slide guitar and organ alongside gurgling moog keyboards and synth bass.”

Elf Power formed in Athens, GA in 1994 and have released 13 albums, two EPs, and a handful of singles, while touring North America, Europe, and Japan many times playing alongside acts like R.E.M., Flaming Lips, Dinosaur Jr., Neutral Milk Hotel, Guided by Voices, Arcade Fire and many more. Albums such as 1998’s Dave Fridmann-produced A Dream In Sound and 2008’s collaboration with the late folk rock icon Vic Chesnutt, Dark Developments, have cemented the band’s reputation as the finest purveyors of modern melodic psychedelic folk rock around. The band became known as a member of the much heralded Elephant 6 Collective.

Band members also maintain and operate the Orange Twin Conservation Community, 155 acres of beautiful land on the outskirts of Athens, GA that has initiated the development of a highly progressive, self-sustainable and ecologically-minded cluster village and nature preserve, featuring a natural amphitheater where they have staged many concerts.