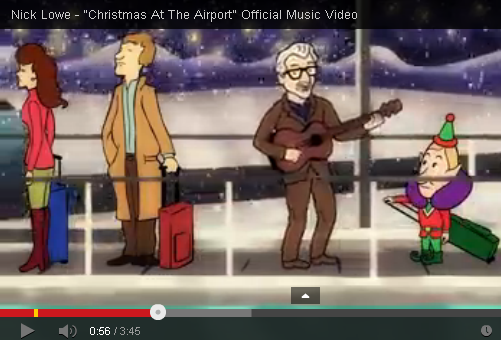 Esquire Magazine premiered the official music video for Nick Lowe’s “Christmas at the Airport,” from his new holiday album Quality Street. The video is a fun spin on traditional Christmas cartoons, featuring an animated, guitar-strumming Nick Lowe. Watch the video now via Esquire and in the player below, and buy the record now via Yep Roc, iTunes and Amazon.

Director Scott Jacobson — whose previous credits include the video for Lowe’s “Sensitive Man” — was presented with the challenge of not only nailing Lowe’s cartoon likeness as he strums a guitar atop a baggage-claim conveyor belt, but downplaying the cheesiness of a Christmas track, a seemingly impossible feat.

“It’s hard to innovate in the fields of Christmas stories and airport jokes,” says Jacobson. “But still: You don’t want to cross that line between ‘comfortably familiar’ and ‘unforgivably hacky.’ Basically, we wanted something that fit Nick’s song, and that possibly conveyed my personal frustration with people who stand still on moving sidewalks at airports. This is the second music video I’ve worked on for Nick, and the first to explore the seldom-discussed travel difficulties of Christmas elves. I’m a big fan of holiday music and an even bigger fan of Nick’s, so it was a gift to be asked.”

Read the full article via Esquire.