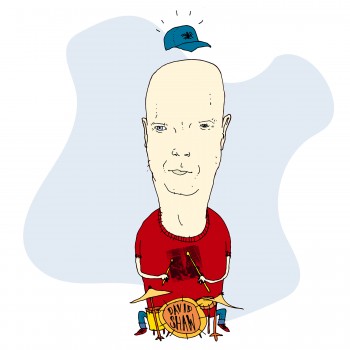 Ever wonder who’s working hard behind your favorite Yep Roc releases? Every month we’ll introduce one Yep Roc employee with a personal Spotify playlist and a quirky caricature from our creative designer, Nathan Golub.

This month, we’re focusing on Yep Roc’s David Shaw. As Senior Project Manager, he has a hand in overseeing every Yep Roc release and guiding them in for a smooth landing. His playlist has a focus on the season of autumn, where he tends to listen to more downbeat, mellow music. While you listen to his fall jams, take a look below to see what kind of work it takes to put a record out into the world, as well as some sneak peeks at what’s on the horizon.

What do you do behind the scenes at Yep Roc?
I have several projects that I manage. The Project Manager job primarily is overseeing album releases from Yep Roc artists from the moment the masters and the artwork are delivered, through setting up the marketing and promotion, and executing that plan. Typically, we’re on a given record for for about 18 months.

What was the first album you ever bought?
When I was a kid, my dad worked in radio, and he used to bring home promo records to me all the time. The first one I remember getting was probably B.T. Express, a record called Express. Kind of an early disco-funk thing. The first album I actually bought was The Who’s Who’s Next.

How did your dad’s radio job shape your music taste over the years?
My dad brought home promo records, my mom was into a lot of motown and pop, and a lot of classic rock stuff as well, and being around that from an early age, I don’t remember a time when I wasn’t listening to records. I think I started buying records when I was 7. I had a pretty decent collection by the time I was 12.

What song would play during the closing credits of the movie about your life?
I’ve actually thought about making a playlist for my death. That’s kind of morbid I guess, but I’ve always thought it would be funny to have a sort of soundtrack playing at my funeral. The one song that would probably be fun to play is Goodbye Goodbye by Oingo Boingo, simply saying, “Goodbye, I’m out.”

What CD’s in your car’s stereo right now?
At this exact moment, it’s the new album from The Old Ceremony. tentatively titled Sprinter, or The Sprinter. I haven’t quite figured that out yet.

What was the first show you saw that left an impression on you?
The first show I saw that left an impression on me was the first show I saw. It was The Who on their first “farewell” tour, at what was then The Orange Bowl in Orlando, Florida. They’re now touring for 50 years, so it was a lie. Joan Jett and the Black Hearts and The B-52’s opened for them. Joan Jett went over okay with the crowd, the B-52’s had beer cans and beer bottles thrown at them. Fred Schneider was shouting, “Stop! You people are terrible,” and they finally left the stage and couldn’t finish their set. The Who finally came on, and I’d been a Who fan since as long as I can remember. It was a pleasure to see them, and it was an incredible show.

What’s coming up soon with Yep Roc that you’re particularly excited about?
Right now, we’re in the process of rolling out the new Jukebox The Ghost record. We’ve spent a lot of time setting this record up, and it’s going very well. It’ll probably be the band’s best-selling record to date. It’s an incredible record, it’s been fun to work on, and I’m excited to finally be getting that out to the masses. I’m also really excited about Nick Lowe touring for Quality Street this December. I’m also just looking forward to what we’ve got coming out in 2015. There’s a lot of great records coming, I’ve heard a number of them, and people who are fans of Yep Roc will be excited to see what we’ve got next year.

Who were you most excited to meet because of Yep Roc?
It’s funny, I have a connection with John Doe because of X, as I used to work at X’s publicity firm in the 90’s. I don’t know if I met John then, but I actually rode in an elevator with him. I wasn’t stuck in it for a day with him. I’ve met a lot of amazing artists I’ve been longtime fans of because of Yep Roc. Sloan, I’m a big fan of. Robyn Hitchcock, Paul Weller, huge fan of. Nick Lowe, of course. That’s a tough one to pick, and I’ve been able to spend time with everyone I’ve mentioned, and it’s been incredible. I don’t feel like I have a job, it’s more like I’m able to hang out with artists I respect and help them promote their music.

Favorite interaction with a Yep Roc artist?
So, Jim White. I was with him in New York, when we were doing radio promo for his album Where It Hits You. We were walking from upton on the west side to downtown on the east side over the course of 2 or 3 hours, and it was great hearing his stories of being a cab driver in the city. We came to a dumpster outside a drug store that had just been cleaned out, and it was full of display racks and scraps from the store. He jumped in that dumpster and started rummaging through it, because he’s a visual artist as well as a musician, and he uses a lot of found objects in his art, so this was a goldmine. At one point he said, “Get a picture of me in here!” and you can still find it on his Facebook page.

Favorite Yep Roc release?
It’s too hard to pick a favorite release based on the music, but my favorite release both because of the music and because it introduced me to Yep Roc, is The Mayflies USA’s Summertown. I was living in Los Angeles at the time, but back home visiting Chapel Hill, and I was in a record store on Franklin St. that’s no longer there, I think it was Monster Records. I think they were playing it in the store. Super happy power pop sounding stuff. Found out who they were, saw Chris Stamey produced it, and I saw that it was on this label Yep Roc in Chapel Hill I’d never heard of at the time, and they’d only been around for about a year. It brought me into the whole Yep Roc thing, and because of that, it’s my favorite Yep Roc release.