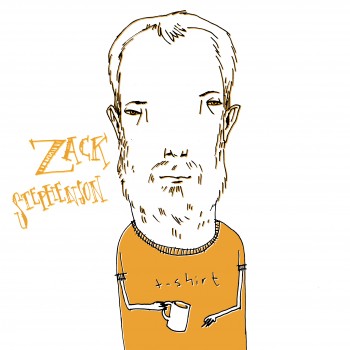 Ever wonder who’s behind your favorite Yep Roc releases? Every month we’ll introduce one Yep Roc employee with a personal Spotify playlist and a quirky caricature from our creative designer, Nathan Golub.

This month, we’re talking to Zach Stephenson, Yep Roc’s Email Marketing and Design Specialist. Between managing Yep Roc’s newsletter and designing emails for Yep Roc artists, Zach also works to reach Yep Roc fans through setting up giveaways and other programs. Below, Zach gives “a musical funhouse” of songs he’s selected along with his insight as a Yep Roc employee.

What’s your Job Title?
My job title is Email Marketing and Design Specialist

What do you do behind the scenes for Yep Roc?
I design and send emails for Yep Roc artists and put together the label newsletter, while researching and brainstorming new ways to reach fans. I also set-up giveaways and in-stores at retail.

What’s your favorite Yep Roc release?
Hard to choose, but if I had to narrow it down to two releases, it would be a tough tie between The Soft Boys’ Underwater Moonlight and Nick Lowe’s Jesus of Cool.

What else do you do besides Yep Roc?
I also work for their parent company Redeye, where I also put together the company’s outward facing messaging and and set up giveaways and in-stores for key artists. Outside of work, I’m either hunting down records or putting them out on a boutique label called Bad Diet.

Best live show you’ve seen recently?
Recently, I’d have to say Obnox at The Duke Coffeehouse a few weeks ago – it’s Bim from The Bassholes and numerous other bands’ new solo project. It was a melange of lo-fi garage bangers mixed with hip-hop that only he could pull off properly.

What shaped your music taste?
Skateboard videos, 120 Minutes and too much time on my hands.

What was the first album you ever bought?
A cass-single of Tag Team’s “Whoomp! There It Is”.

If you had to be stuck in the desert with one musician, who would it be?
Roky Erickson, so we could both pretend we are aliens and sing campfire songs.

What’s coming up soon with Yep Roc that you’re particularly excited about?
I’m really looking forward to the Eggs Over Easy release that they’re putting out, which is an old pub rock band that came from America and that started the whole pub rock scene in England that led to Dr. Feelgood and Brinsley Schwarz, who spawned the first Stiff, Nick Lowe.

How did you decide your playlist?
I wanted to make a musical funhouse.

What led you to work at Yep Roc?
I started out at Redeye and gravitated to Yep Roc, which being a long-time fan, is a dream come true.

Best interaction with a Yep Roc artist?
I got to high five John Doe.

If you had to enter a high-stakes poker tournament with one Yep Roc musician, who would it be?
Tony Joe White or Dave Alvin, they’d probably have some good whiskey.

Which Yep Roc artist would you ask on a date?
I’d ask them all on dates if the timing was right.