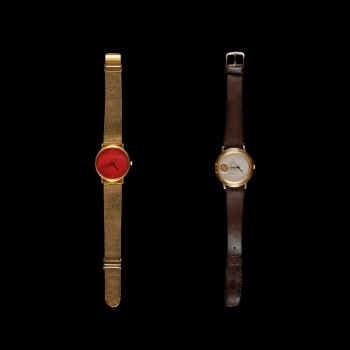 Department of Eagles’ Fred Nicolaus’s first solo project, Golden Suits, is now streaming early exclusively on Spotify. Listen HERE or in the player below. Pre-order the album HERE at the Yep Roc Store or HERE on iTunes.

Golden Suits is Nicolaus’ first project working alone.  It was inspired by a strange year that saw him get chased out of an apartment by a rat infestation, go through a painful breakup, travel to Germany to learn about his grandfather’s death in WWII, go broke, and lose forty pounds. Throughout that chaotic time, he became obsessed with a book of short stories by the fiction writer John Cheever, and started writing songs that blended his own experiences with fragments from the book (the name “Golden Suits” is a reference to the final line of a Cheever story). The result is a collection of ten songs that combine nostalgia, sentimentality, skewed references to a book about suburban marriage in the 1950s, personal confessions and abstract non-sequitors that take a shot at the sublime.

Musically, the songs follow the thread of Department of Eagles’ swervy take on classic pop in the vein of Randy Newman, Van Dyke Parks, Paul Simon, and Lennon and McCartney solo.  Nicolaus, who generally wrote the simpler, poppier material in DoE, followed the mold of “take a straightforward, direct song and play with it until there’s something interesting going on.”  Working outside of the band was a chance to indulge in production ideas that wouldn’t have flown within it, like the Graceland-inspired one-two beat and female vocals on “Swimming in ’99″ or the unadorned piano ballad feel for “Restaurant Song.”

Throughout the recording process, Nicolaus played most of the instruments, but had help from a talented group of friends including Chris Bear and Chris Taylor from Grizzly Bear; Fraser McCulloch from Milagres (who engineered the album); Becca Kauffman and Felicia Douglass from Ava Luna; Kris Nolte and Ian Davis from Mason Jar Music (who arranged strings); and Daniel Rossen (who sang harmonies and was an all-around supportive spirit). All in all, the album took about two years of writing and recording in several studios and psuedo-studios in Brooklyn to finish.