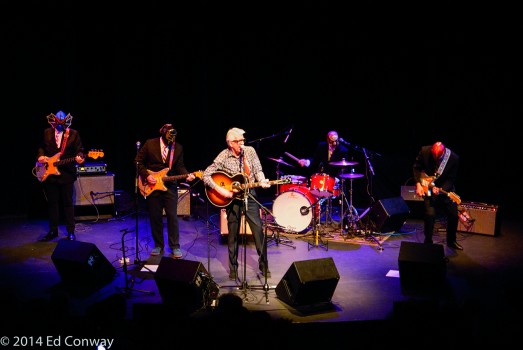 After a 2014 tour that included sold-out shows and special performances everywhere from NPR”s Fresh Air to A Prairie Home Companion, Nick Lowe’s Quality Holiday Revue will return to the U.S. in December for a dozen shows in all-new markets.  Mute, Mexican-wrestling-mask-clad superheroes Los Straitjackets will serve as Lowe’s backing band, and The Cactus Blossoms will open all dates except Durham, NC.
Just before the launch of the tour, Yep Roc will release Nick Lowe & Los Straitjackets’ ‘The Quality Holiday Revue Live’ LP for Black Friday, November 27.  Recorded live in Boston last year, the LP captures a performance the Boston Herald called “spectacular…what an amazing concept…what an amazing show.”
The Quality Holiday Revue follows the release of Nick Lowe’s first-ever holiday album ‘Quality Street: A Seasonal Selection for All the Family’ (Yep Roc).  While the New York Timesnoted that “Nick Lowe is surely up there with Bob Dylan and Scott Weiland as one of the most surprising artists to record a Christmas album,” Rolling Stone has already ranked ‘Quality Street’ in the Top 20 on it’s list of 40 Essential Holiday Albums.

Before launching his 2015 Quality Holiday Revue, Lowe will hit the U.S. in October for a handful of solo dates, including a very special performance opening for Yo La Tengo at the newly renovated Kings Theatre in Brooklyn.  Go here for a full list of dates: http://nicklowe.com/tour-dates/