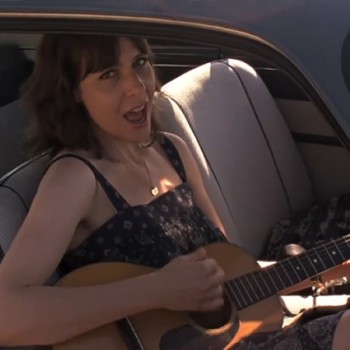 IFC FIX premieres Eleni Mandell’s new music-video “Magic Summertime” from I CAN SEE THE FUTURE – Out 7/10.

You can almost feel the billowy breeze in this hazy ditty by LA’s Eleni Mandell, between the strings and the vibes. The video about musical lovers, in which sea foam and sunbeams play to fond summertime memories, was shot on 16mm and Super 8 to lend that home movie nostalgia.

“The idea came to me while listening to the final mix of the song,” Mandell said, whereupon she imagined having her ex-boyfriend Charlie Wadhams play her leading man in a video where they did a lot of dancing together. Then she brought in her friend Jeff Martin (who’s in the band Idaho) to direct and his ex to play the choreographer. “It was a real love fest!” Mandell noted. “Nanci did a great job of choreographing two non-dancers (though Charlie and I both love to dance) and was such a good sport to agree to be in the video at the last minute and play the home wrecker.”

Mandell went on to tell how she got involved with Martin to shoot the video. “He’s probably filmed every minute of his life,” she said. “We’re in a club (there are only 3 of us in this club) called Urban Hikers. The point is to walk to a restaurant and pig out because we’re walking there and back. Our longest hike was 9 miles! Walking in Los Angeles is a real adventure.” Martin always documents the group’s gluttonous hikes on film and has previously directed few music videos for a few bands (including Ingrid Michaelson), so the collaboration came naturally — even if the personal relationships involved were a bit risque. Eleni Mandell’s I Can See the Future, is AVAILABLE NOW at the Yep Roc Store.

Tags: Eleni Mandell, I Can See The Future, IFC, Video