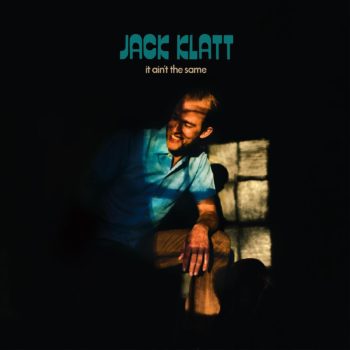 Jack Klatt has announced the release of his eagerly awaited new album. IT AIN’T THE SAME arrives everywhere via Yep Roc Records on Friday, September 27.

IT AIN’T THE SAME is preceded by today’s premiere of a raucous new single. “Prove My Love” is available now for streaming and download HERE; the track is joined by an equally rockin’ companion video, co-starring Minneapolis-based artist Alberta Mirais and streaming via YouTube HERE.

“’Prove My Love’ is a pure and simple rock n’ roll song about the push and pull of romance,” says Klatt. “What better way to visually capture the joy and chaos of love then two people dancing together?  We shot the video on the night of the summer solstice at a fabrication shop that I work at in North East Minneapolis when I’m not on the road. It was a hot night and many beverages were consumed while me and Alberta Mirais danced the night into day. I couldn’t dream of doing something like this with anyone but her. She is most assuredly the star of the show.”

PRE-ORDER “It Ain’t The Same” – all order from the Y-Store feature FREE WORLDWIDE shipping!

Hailed by Rift Magazine for “great songs with witty lyrics” and “one helluva guitarist to boot,” Klatt will herald IT AIN’T THE SAME with an array of upcoming live dates, beginning with an August run alongside Parker Millsap and then followed in September by a series of dates supporting Pokey LaFarge. Additional dates – including headline shows and more – will be announced soon. For updates and more, please visit www.jackklatt.com/tour.

IT AIN’T THE SAME sees Jack Klatt affirming American roots music’s contemporary credence with devotion, depth, and his own distinct worldview. Produced by Klatt at Chicago’s Reliable Recorders, the album evinces a more creative approach to the studio than his previous outings while still staying true to the simplicity and spirit of traditional Americana. The singer-guitarist is joined in his efforts by a skilled set of session superstars, including The Deslondes’ John James Tourville on electric guitar and pedal steel, bassist Casey McDonough (NRBQ), and Alex Hall (JD McPherson, Robbie Fulks) on drums, percussion, keys and engineering, with harmony vocals from The Cactus Blossoms’ Page Burkum. Songs like the supple “I’ll Never Let You Down” and the coolly confident “World Shaker” offer ample evidence of Klatt’s increasing prowess and power, melding his early punk influences with the vast gamut of Americana styles to craft a robust, impossible-to-categorize collection that, as its title suggests, is both brand new and something special indeed.

“In the past, my records had been recorded live in two or three days, straight to tape, with little to no overdubbing,” Klatt says. “I wanted to do something different this time, take some more care and explore all the possibilities the studio has to offer. This record feels like a step forward for me, a departure from my earlier country blues-based recordings. I learned and grew musically so much through the process. I can’t wait to get back in the studio and do it again.”

Balladeer and bluesman, singer-songwriter and fingerstyle guitar master, Jack Klatt has worked tirelessly to take the remarkable range of Americana and made it his own. Bridging early rock ‘n’ roll to R&B, raw soul to country folk, the Minnesota-based musician’s idiosyncratic output has earned him acclaim from the likes of Saving Country Music, which praised Klatt for “authentically interpreting ageless music with a new enthusiasm to make sure the old ways of making melodies never wane.”

Born and raised in the Twin Cities, Klatt dropped out of college to see the world, busking his way from San Francisco to Spain before returning home with a new focus on songcraft and fingerstyle technique. He quickly put together a backing combo and began playing out across the Midwest, lighting up barrooms, saloons, clubs, and festival stages with his signature approach towards the country blues form.

Klatt soon began reaping national attention, with No Depression hailing his most recent LP – 2016’s SHADOWS IN THE SUNSET – as “a collection of straight-forward, well-told stories of travel, love, saying goodbye and new beginnings.” Saving Country Music named the LP to its “Essential Albums List for 2016,” applauding it as “a portal back to a simpler, and more enriching time in American music.” “It’s a word that often gets thrown around,” wrote The Daily Country, “but there’s something truly genuine here. Klatt, influenced by his years of travel, delivers his narratives without pretense, making (this) a beautifully done album of classic American music.” “The expansive and gilded country record is tender, thumping, and relaxed,” wrote his hometown’s City Pages, “played as if Klatt was sitting by a clear river of sounds where centuries flow together. The vibes are imperceptible, restful, and everlasting.”