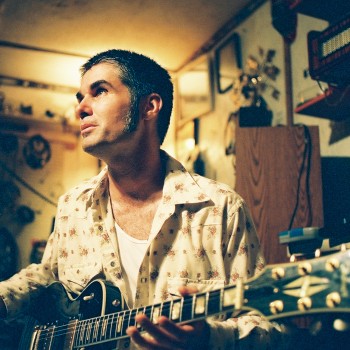 Nearly five years is a long time to wait, but it’s been that long since Jim White’s last official LP. Though he released a live EP and a soundtrack for a play in the meantime, it’s been a tumultuous span of time — White left Luaka Bop, the label that had been his home since his auspicious 1997 debut and, in the middle of recording his latest, separated from his wife. Thankfully Yep Roc Records is releasing White’s fifth LP, Where It Hits You, on February 21st. AD sat down with Jim at the Yep Roc offices in Haw River, North Carolina to talk about leaving Luaka Bop, landing on Yep Roc, prescient song writing, the financial hazards of touring and why raking leaves in England would have been a good thing.

Aquarium Drunkard: You’re on Yep Roc Records now — this is your first record for a label other than Luaka Bop, the label you’ve been on since the beginning. How did you end up on Yep Roc and why leave Luaka Bop?

Jim White: Luaka Bop sort of, quote unquote, discovered me. I was sort of a mentally ill cab driver in New York City writing songs about life in the South. No one was interested. No label was interested. And they said, ‘yes, we want to make a record with you.’ It was very puzzling at the time. So I feel a great sense of love and gratitude toward them. We made four records and a bunch of other little things together. The music industry has collapsed and as the industry has collapsed, the ability for labels to stay in business has become more and more dire. When they offered me the budget for this record, it was a very small amount of money. What they’re basically saying is ‘there isn’t enough money in the music business for you to make a living and us to make a living, so we’re going to trim it back to nothing.’ And they would own the whole record if I made it with them. It was a really hard decision to make because I love those people and I really care about them and I feel such gratitude, but I couldn’t starve my family to stay there at the label.

So I went off on my own and I made this record on my own dime. Yep Roc didn’t fund the record — we came to them after the fact. And I ran out of money mid-way through making the record and I did a Kickstarter campaign. And people all over the world pitched in and helped me finish the record. It wouldn’t have gotten done. I would’ve lost my house if they hadn’t pitched in what they did. When the record was done, we loved working with Redeye Distribution [located in the same building as Yep Roc] who distributes Luaka Bop. So my manager went to Yep Roc and they were open arms. In some ways, at this point in my career, it’s a better fit. When I first started, it was kind of an anomaly that this guy singing songs about life in the South was on this world music label, so it got a lot of attention because of that. But after awhile, the fan base they cater to isn’t that much interested in what I do, I don’t think. So hopefully this will be a good fit. They deal with a lot of American singer-songwriter type people like John Doe and Nick Lowe and other people whose names end in ‘o.’ [laughs] So hopefully it will be a good fit. So far everything’s been great — a lot of enthusiasm and a lot of encouragement.

AD: How much did you raise through the Kickstarter campaign?

JW: We set our sights low because with Kickstarter, if you dont’ meet your goal, you get nothing. So we set a very simple level of $7,000. I made a bunch of art and did a bunch of things as incentives and it ended up bringing in $10,000. I don’t get that full amount. Kickstarter took some, PayPal took some, I had to give my manager some. So in the end there was about $8,000 I got to put toward the record.

JW: Yeah, I like yard work. I went to England — some people asked me to do it, to sing for them — but they didn’t let me rake the leaves. Which would have made me feel more like…Continue Reading

Where It Hits You is out 2/21 and is available now for pre-order at the Yep Roc Store.

Tags: Aquarium Drunkard, Jim White, Where It Hits You