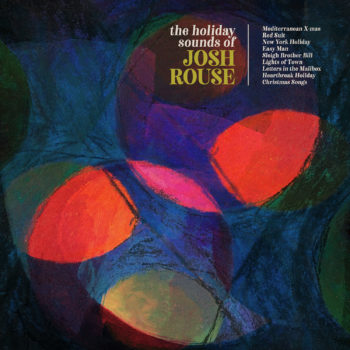 The Holiday Sounds of Josh Rouse features beautiful harmonies and gentle, bright melodies wrapped in the lush, folk/pop soundscapes that have become his signature. The album illustrates themes of childhood nostalgia and holidays spent away from home, with lighthearted, upbeat instrumentals that make these songs enjoyable year-round. From the rollicking “Sleigh Brother Bill” to the reflective “Letters In The Mailbox” and the dreamy closing track, “Christmas Songs”, Josh Rouse is redefining what holiday music can be.

Over the last two decades, Josh Rouse has solidified his status among this generation’s most acclaimed songwriters. His warm, effortless style and insightful lyrics have garnered widespread critical acclaim in the US and abroad. Though 2018’s release Love in the Modern Age pushed his sound into new sonic territory, The Holiday Sounds of Josh Rouse is a welcome return to form with nine songs written throughout the last ten years. The album was recorded in the fall of 2018 at Alex The Great studio in Nashville, TN and produced by Rouse and Brad Jones.

Physical purchases of The Holiday Sounds of Josh Rouse will also include an exclusive EP, featuring three demos from the album as well as performances of three traditional holiday songs.

The Holiday Sounds of Josh Rouse is available now for pre-order via the Yep Roc store!