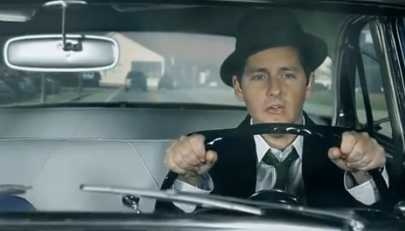 Josh Rouse premieres new video for “Julie Come Out Of The Rain” from THE HAPPINESS WALTZ.

Josh Rouse felt a little like Jimmy Stewart in his new video. With its vintage Buick and green-screen footage of San Francisco, the video for Julie (Come Out of the Rain) could almost pass for outtakes from an Alfred Hitchcock suspense thriller like Vertigo.

Rouse, a Nebraska native who now lives in Spain, says the video’s director, Ignacio Bernal, came up with the concept of giving the video a film noir look.

“I just sat there all day and drove and lip-synced,” Rouse says. “When we were shooting it, they were, like, man, this is just like an old Hitchcock movie. So I definitely went into the Jimmy Stewart role.”

Julie (Come Out of the Rain) appears on Rouse’s latest album, The Happiness Waltz, which came out in March. In her review of The Happiness Waltz, USA TODAY’s Elysa Gardner wrote, “the beautifully crafted soft-rock tunes … evoke a type of troubadour who flourished back in the ’70s.” Rouse describes the song and the album as “moody folk-pop,” saying, “A lot of the album is a lot more personal. It deals with what’s going on in my life, raising young children, and things that happen in a relationship when that goes on.”

Rouse will start a two-week tour of the USA on Thursday in Birmingham, Ala., returning in June for additional shows.

Watch the video for “Julie Come Out Of The Rain” HERE on USA TODAY and in the player below.