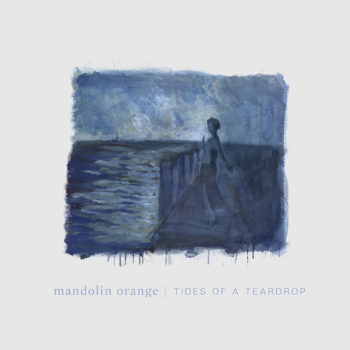 Today, Mandolin Orange — North Carolina-based singer-songwriter Andrew
Marlin and multi-instrumentalist Emily Frantz — announce the release of Tides
Of A Teardrop, their first new music since 2016. Out February 1, 2019, on Yep
Roc Records — their fourth album for the venerable label — Tides Of A Teardrop
finds Mandolin Orange exploring the intimate grief at the frayed edges of their
songwriting and confronting loss head-on, facing down the depths of despair and
emerging with something renewed and redemptive. It’s a progressive, personal
statement from one of roots music’s most thoughtful young groups, on the cusp
of yet another prodigious breakthrough. Pre-order the record NOW!

On the self-produced Tides Of A Teardrop, their slow-burning acoustic
meditations on love and loss are belied by a newfound directness as Marlin
tackles the death of his mother, who died when he was 18. “I think her passing
was almost the genesis of my writing,” says Marlin. “That was when I really
began to find refuge in writing songs.”

Marlin’s songwriting voice emerges clearer than ever, set in sharp relief by the
indelible performances of Mandolin Orange’s longtime touring band: Josh Oliver
on keyboards and guitar, Clint Mullican on bass, and Joe Westerlund on drums.
Whether it’s the trilling, weighty atmosphere of the allegorical “Wolves” or the
Appalachian yearning of the hymn-like “Suspended In Heaven” (written on
Mother’s Day), Marlin and Frantz’s vocal and instrumental interplay is as dialed in
as ever, the instinctual expression of deeply known but unspoken truths.
Mandolin Orange’s last album, 2016’s Blindfaller, is an exceptional outlier in the
age of streaming — a quietly reflective, acoustic album that made a lot of noise.

It was named one of Rolling Stone’s ‘40 Best Country Albums of 2016,’ debuted
at #3 on the Billboard Bluegrass Chart, and helped the band surpass 100 million
catalog streams, multiplying its fanbase through a combination of their “angelic
harmonies” (NPR Music), “low-key instrumental heroics” (Vox), and fervent word-
of-mouth support. Their touring profile skyrocketed: Mandolin Orange sold out
every single U.S. date they headlined in 2018, sold out 12 dates (out of 14) on a
headlining Winter 2018 European tour, played with the likes of the Avett Brothers
and Josh Ritter, and graced iconic stages such as Red Rocks (twice!), the
Ryman, Bonnaroo, and Newport Folk Festival.

Founded by Marlin and Frantz after meeting at a bluegrass jam session in 2009,
Mandolin Orange’s journey has been an auspicious one, as they’ve garnered
praise from NPR, Paste, American Songwriter and more, and performed at such
esteemed festivals as Telluride Bluegrass, Pickathon, and Austin City Limits.
Tides Of A Teardrop follows Blindfaller (2016), Such Jubilee (2015), and This
Side Of Jordan (2013).

Mandolin Orange are preparing for an extensive North American tour in 2019,
including stops at the Durham Performing Arts Center, Music Hall Of
Williamsburg in Brooklyn, Los Angeles’s El Rey Theatre and the 9:30 Club in
Washington DC. A full list of dates below.

Pre-order your copy of Tides of a Teardrop HERE!