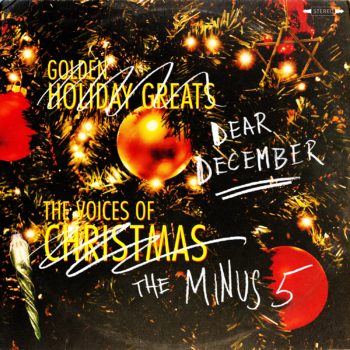 The Minus 5 To Release Dear December

Album Available on CD and at Digital Service Providers December 1

The Minus 5 returns with Dear December, a humble offering of original holiday classics available as a limited edition LP Record Store Day exclusive November 24. Featuring a deluxe Advent-inspired calendar, a gatefold cover and white vinyl, 1,500 copies will be available worldwide. The album will also be available at all digital service providers and on CD December 1.

In early 2017, Scott McCaughey penned a few holiday numbers to submit to a well-known artist’s prospective holiday album. He became so inspired by the task that he wrote more than an album’s worth of material and decided to record that album with his group, The Minus 5, which for this project includes Minus 5 co-captain Peter Buck and drummer Joe Adragna as core members.

“I wanted to evoke the classic Christmas album feeling without leaning too heavily on sweet baby Jesus and good ol’ Little St. Nick,” says McCaughey. “Yet I also wanted to curb my cynical tendencies as well. I feel we succeeded on both counts, and the results are a holiday record that should work for any and all.”