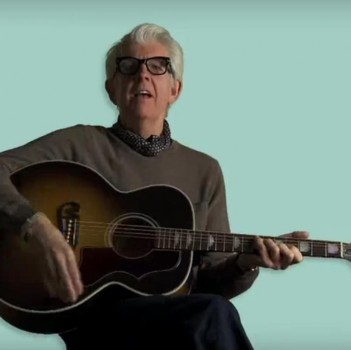 When you’ve been making catchy pop songs as long as Nick Lowe has it’s okay to look to classic sounds for inspiration. Lowe’s new song, “Sensitive Man,” finds the sexagenarian rocker digging deep into the essence of ’50s Sun Records-era rock. The song could feel right at home on a jukebox next to a tune by The Crickets or Jerry Lee Lewis. The backing vocals, Tijuana Brass horns and jangly guitar sounds look to the past but aren’t stodgy nor simply nostalgic. Lowe’s lyrics are simple and witty — expressing complex issues with a wink and smile. Also, as a side note, more songs need to include the word “dinky-doo.”

Nick Lowe told us what inspired him to write “Sensitive Man”:

“The song came about when I was reading Dream Boogie, Peter Guralnick’s book about Sam Cooke. I thought it was such a great book, and this song called “Sensitive Man” came almost fully formed after I read it.

I put it away, I thought, “I can’t use it.” But I quite liked the basic lyrical idea, so I’d get it out of the box every so often, so to speak, and have a look at it. Eventually I changed it around quite a lot.

It’s a really good title. I’m sure someone has done it, but I don’t know of another song with that title.”

I expected something sweet and romantic from Director Scott Jacobson’s video for “Sensitive Man” (which is Lowe’s first music video in 18 years). I did not expect copious amounts of jean shorts. The video follows a man, played by comedian/podcaster Mark Maron, entering a class to help him become a more sensitive guy. This process somehow involves rainbow-colored auras, gorilla masks and something known as “Rollover Whispers.”

Jacobson must have called everyone in his Rolodex for the film. Some apparent alumni of the class are Wilco, Robyn Hitchcock and Lowe’s young son. The teacher is played by comedian Tim Heidecker of the bizarre television show Tim and Eric Awesome Show, Great Job!

I asked Jacobson about casting the “Sensitive Man” video:

“This was the easiest ever video to cast. I actually found more actors who loved Nick and wanted to be a part of it than I could accommodate. If anyone cares to finance a 10-part series of Nick Lowe videos so I can fit everybody in, that would be great.”

The Old Magic is available now on CD, 180 gram LP and digital at the Yep Roc Store.

Check out Nick Lowe’s confirmed US tour dates with a full band HERE.