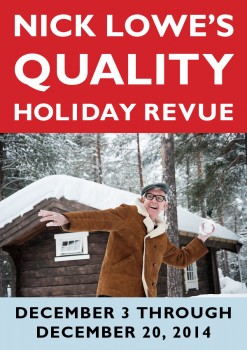 ‘Tis the month before Christmas, and all through the land / Nick Lowe will be tourin’ with a rock-and-roll band / He’ll play some old chestnuts and roast a few too / A Small Face will join him for this Quality Revue.

‘Tis the season for Nick Lowe! Yep Roc is excited to announce that Nick Lowe has confirmed his first tour dates supporting Quality Street: A Seasonal Selection for All the Family. Billed as Nick Lowe’s Quality Holiday Revue, the thirteen-date tour will feature Lowe backed by a full band playing material from his catalog as well as “seasonal selections.” Small Faces keyboardist and Rock and Roll Hall of Famer Ian McLagan will support on most shows. More details of the tour will be revealed soon.

Before the tour launches on December 3, Lowe will perform on A Prairie Home Companion from NYC’s Town Hall on November 29. Released in 2013, Quality Street was the most acclaimed holiday album of the year. Dubbed a “sleighbell-free zone” by Lowe, the album was hailed as“characteristically great” (New York Magazine) and “unimpeachably tasteful”(Washington Post). It features twelve new recordings, including three Lowe originals (one co-written with Ry Cooder), a song by Ron Sexsmith written expressly for the collection, covers of holiday favorites by Roger Miller and Wizzard, rarities and more – all performed in Nick’s singular style.