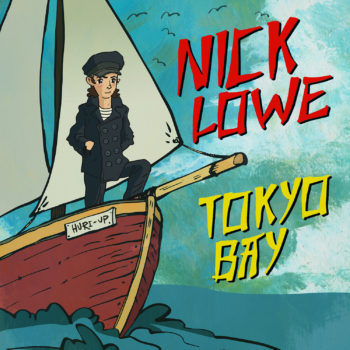 Nick Lowe returns with an EP sized slice of Anglo-American rocking exuberance. His first New York session in ten years, this EP is also Lowe’s first release of new music in five years (Quality Street: A Seasonal Selection for All the Family was released in 2013).

Tokyo Bay/Crying Inside features two Nick originals; frolicsome “Tokyo Bay” is juxtaposed with more meditative “Crying Inside”, while the EP is rounded out with covers of the Bee Gees’ “Heartbreaker” and Cliff Richard’s “Travellin’ Light.”

Reflecting on the EP, Lowe describes two separate methods of working with originals and covers. “When I write my own song, I work at it until I start to think that it’s a cover…The opposite is true when I come across a cover I like. I work at it until I believe that I wrote it, and I can take liberties with it in the same ways I can with ones I did actually write.”

Los Straitjackets, Lowe’s recent tour mates and fellow label mates, back Lowe on both the originals and covers of this record. They will be back on tour again this June, a few days after the release of this EP.  See below for a full list of dates.

The physical EP is available as a double vinyl 45 featuring exclusive artwork with each disc.

Praise for Tokyo Bay/Crying Inside:

“The Jesus of Cool rocks again. With an irresistible energy…Lowe proves definitively that rock and roll isn’t just a young man’s game.” – NPR