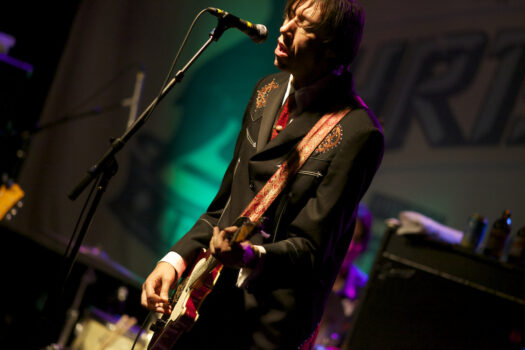 We are deeply saddened by the sudden passing of our dear friend, Dallas Good, of The Sadies.  He died on Thursday, February 17 of natural causes while under doctor’s care for a coronary illness discovered earlier this week.  He was 48 years old.

“Dallas was such a special individual who is in one of my favorite bands of all time,” said Glenn Dicker, Co-Owner of Yep Roc Records.  “We’ve lost a cornerstone of the label.  The Sadies have always been the band to watch and hear out there for me.  I am grateful to you, Dallas, for so many great shows, spine shaking music and good times.  I’ll never stop listening.”

Since their formation in 1994, Sadies have developed, even perfected, a style of music that is uniquely their own.  Their first record with Yep Roc was 2002’s Stories Often Told and over the past 20 years on the label, they’ve released six studio albums, a live record, a soundtrack and collaborations with both Andre Williams and John Doe.  Last month, the band shared their latest single, “Message to Belial,” produced by Richard Reed Parry of Arcade Fire.

We send our love + condolences to Dallas’ family, friends and fans during this devastating time.  The stage is dark today with the all too soon passing of one of music’s brightest lights.

We love you, Dallas.  Rest In Peace.