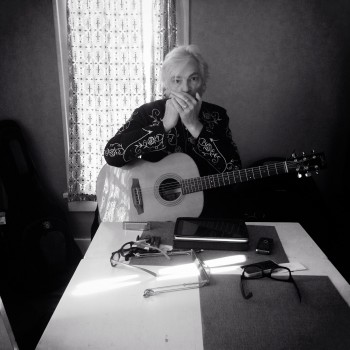 We are excited to announce The Man Upstairs a new album from psychedelic folk troubadour Robyn Hitchcock. The Man Upstairs will be available on August 26.  A 4th grade music class from Hillsborough, NC, interviewed Hitchcock for their weekly WOCS podcast – listen in to an excerpt from the podcast, and stream the first song Hitchcock is sharing from the album – a stunning version of the Psychedelic Furs classic “The Ghost in You” – in the media player below.

The Man Upstairs sees Hitchcock uniting with legendary producer Joe Boyd (Nick Drake, Fairport Convention) for one of the most unique recordings of his already quite idiosyncratic career. Rather than simply record a new selection of songs, Boyd suggested what he called ‘a Judy Collins album’ such as Elektra would have released in 1967 – part well-known favorites, part personal discoveries, and part originals. The multi-tiered approach offered Hitchcock the rare opportunity to record as a performer, not “just another singer-songwriter laying their freshest eggs.”

Thus, modern standards like Roxy Music’s “To Turn You On,” The Doors’ “The Crystal Ship,” and The Psychedelic Furs’ “The Ghost In You” are interlaced with lesser-known gems from such pals as Grant-Lee Phillips (“Don’t Look Down”) and I Was A King (“Ferries”), the latter featuring harmony vocals and guitar from the Norwegian indiepop combo’s own Anne Lise Frøkedal. Meanwhile, new Hitchcock originals like “Trouble In Your Blood” and “Comme Toujours” stand among his most fragile and heartfelt, his stark vocal and guitar cast by Boyd against simple, autumnal backing from longtime collaborators Jenny Adejayan (cello), Charlie Francis (piano), and the aforementioned Frøkedal (harmonies).

“I’ve always wanted to make a folk record produced by Joe Boyd,” says Hitchcock, “and now I have: thank you, universe!”

From plugging in Bob Dylan’s electric guitar at his infamous 1965 performance at the Newport Folk Festival to his stewardship of an array of folk heroes – including Vashti Bunyan, Shirley Collins, and The Incredible String Band – Joe Boyd has been intimately involved in some of music’s milestone moments. Young Robyn first encountered Boyd almost five decades back, the words “Produced by Joe Boyd” emblazoned on album after album in his teenage canon. The two eventually made a more human – though no less personal – acquaintance in 1985 as Boyd helmed R.E.M.’s Fables of the Reconstruction. A relationship developed and in 2012, they toured the US with “Robyn Hitchcock & Joe Boyd – Live & Direct From 1967,” coupling musical performances with Boyd’s reminiscences of a time when giants walked among us.

Hitchcock’s 20th solo studio recording – give or take the odd outtake, demo, and rarities compilations – The Man Upstairs arrives hot on the heels of 2013’s Love From London, which received some of the most glowing notices of Hitchcock’s storied career. “One of his recent best,” decreed Rolling Stone. “10 songs of chiming folk-rock grace and slippery black humor in which apocalypse falls gently.” BBC Music applauded “(Hitchcock’s) customary playfulness in dissecting matters of the heart and cerebellum,” while MOJO noted “Love From London once again shows (Hitchcock’s) ability to reconcile the sheer peculiar wonder of being alive.” “Hitchcock catches you – leaves you breathless – with his ability to compel,” declared American Songwriter. “He has pared the whimsy to go for a deeper type of magic realism, one that is serious rather than humorous. He seems to be out there – mining the subconscious – while still firmly aware of pop songcraft and the real world as we live it.” “Why does the world need Robyn Hitchcock?” wondered Consequence of Sound. “Well, without him, who would give us songs to boogie to while the world collapses around us?”

4. Trouble In Your Blood

5. Somebody To Break Your Heart