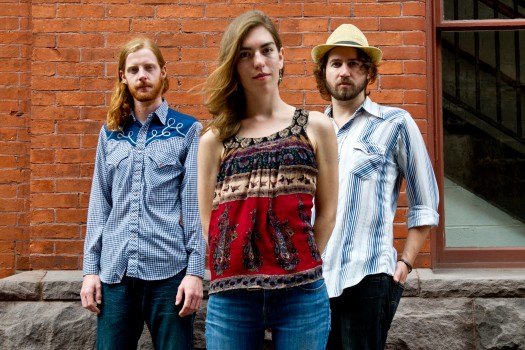 Currently on tour in support of their second full-length album, Best Medicine, which debuted at #2 on Billboard’s Bluegrass chart and #1 on Folk-DJ chart in October, The Stray Birds have added 2015 dates to their U.S. tour. The acclaimed multi-instrumental/vocal trio’s West Coast run will kick off at the Huntington Beach Arts Center in Huntington Beach, CA, January 30, with stops in Los Angeles, Berkeley, Portland, Seattle, among others – dates attached.

Co-produced by the band and Stuart Martin, Best Medicine features 12 tracks, including 10 original compositions and two traditional songs, “Pallet” and “Who’s Gonna Shoe.” The album follows the band’s 2012 highly praised self-titled release, which NPR Music named as one of the Top 10 Folk/Americana albums.

Filmed at various record stores, Yep Roc Record Stories features artists from the label talking about their favorite vinyl albums. Check out The Stray Birds’ filmed on location at The Re-Collector in Schenectady, New York, the inspiration behind the album’s title track in the player below.. With over 10,000 views, the official “Best Medicine” video also features the locale.

Their Borderland EP was released in 2010, followed by the eponymous full-length debut The Stray Birds in 2012 and the Echo Sessions EP in 2013. The band formed in Lancaster, PA in 2010.