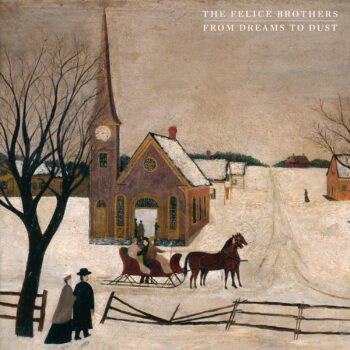 Today, The Felice Brothers have announced their new album From Dreams To Dust will be released on September 17, 2021 via Yep Roc Records.

They’ve also released the official video for “Jazz On The Autobahn,” the second song to be released from the forthcoming album. The stop motion video was painted and constructed by Ian Felice and took over a month to complete.

Ruminating on the risks of taking things for granted in our daily lives, Ian Felice, the lead singer/songwriter of The Felice Brothers, expresses how meaningful the experience of playing music with his band has been after long months of social distancing. On From Dreams to Dust, the band’s exuberance to be together doing what they do so well is palpable. Characteristic of The Felice Brothers, the new tracks are a mixture of somber tunes with ones that are musically upbeat, all the while carrying messages that beg listeners to think deeply about the environment, humanity, legacy, and death.  Many of the songs depict the passage of time, nostalgia, transience and getting older.

The Felice Brothers, Ian (guitar and lead vocals) and James (multi-instrumentalist and vocals), hail from the Catskills, NY, where their early songs echoed off subway walls and kept company with travelers and vagrants. Their current lineup, with the addition of bassist and inaugural female Felice member Jesske Hume (Conor Oberst, Jade Bird) and drummer Will Lawrence (also a singer/songwriter) as their rhythm section, promises to be the best yet.

The Felice Brothers On Tour!