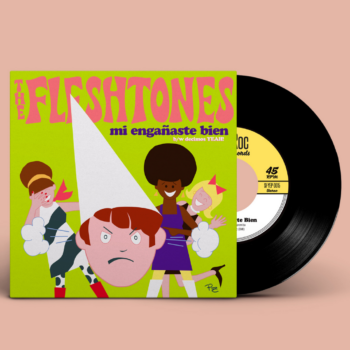 Hailed by The New York Times as “a New York rock & roll institution,” The Fleshtones haven’t stopped rocking since their 1976 debut at CBGBs. Pumping out hits for over four decades, they were the first band to play at Irving Plaza and Danceteria in Manhattan, Maxwell’s in Hoboken, New Jersey, and the first to be booked at the original 9:30 Club in Washington, D.C.

In celebration of their 45th anniversary, the “perennial garage rockers” (SPIN) will mark the momentous occasion with the November 12 release of a new limited edition Spanish-language 45 single: “Mi Engañaste Bien” and “Decimos Yeah!” This 45 single is limited to 1,000 copies worldwide – so get one while you can

The A-side is a groovy Peter Zaremba original, and the flip is a Spanish cover of Cliff Richard‘s “We Say Yeah.” The lead single “Mi Engañaste Bien” is available to stream here and premiered today with a video directed by Olivier Davy.

“The idea for “Mi Engañaste Bien” came to me on a sleepless night at The Tropicana Hotel in 1984 when I was in Hollywood hosting “The Cutting Edge” on MTV, but it took me over 35 years to realize the song had to be in Spanish! So now you know – don’t get tricked again, The Fleshtones are the originals!”

Over their storied career, The Fleshtones have been the subject of books (Sweat by Joe Bonomo), movies (Pardon Us For Living But The Graveyard’s Full, 2009), played on Andy Warhol’s short-lived MTV show while Sir Ian McKellen read Shakespeare over their jamming, and were the last band to publicly perform at the World Trade Center’s Windows on the World.

The Fleshtones On Tour