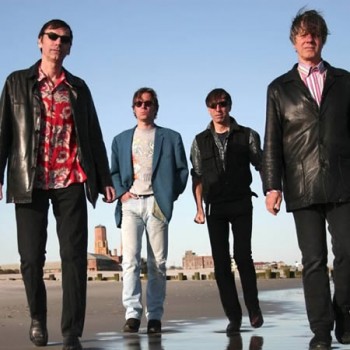 Yep Roc Records is pleased to announce the release of the latest effort by garage rock band, The Fleshtones, titled Los Fleshtones Quatro x Quatro on August 21. The four song EP was recorded in Spain in February of 2010 and includes four songs recorded in Spanish. The EP will be released on vinyl and digital only. In addition to the new recordings, The Fleshtones will be playing the upcoming Yep Roc 15 celebration in October in Chapel Hill, North Carolina.

Recorded last February while on tour in Gijon, Spain, the album was co-produced by longtime friend of the band and former member of the Spanish rock sensation Dr. Explosion, Jorge Muñoz-Cobo Gonzalez. Finally taking Gonzalez up on his offer to record in his studio with vintage gear, they recorded the EP with little time to spare.

“The story of this record goes way back to our original bass player, Marek Pakulski, finding a bunch of albums including ‘Los Johnny Jets A Go Go’ in the trash in front of Joey Ramone’s Lower Eastside tenement one night in 1977, ” says Fleshtone Peter Zaremba.  “Johnny Jets were a typical Mexican ’60s rock and roll group -covering top-ten hits of the time like ‘Wooly Bully’ in Spanish with varying degrees of competence — just the thing to appeal to The Fleshtones. Rather than the Spanish language versions of overly-familiar tunes like ‘Hang On Sloopy’, what really caught our ears were two more-or-less original tracks ‘No Tengo Dinero’ and ‘Todos Queremos A Lupe’ (which seemed  to at least be inspired by Johnny Thunder’s  1962 hit ‘Loop De Loop’). We decided we would record these two songs ourselves as soon as possible. If nothing else, The Fleshtones are good for their word!”

Often tagged as garage rock revivalists, The Fleshtones mix the fuzz guitar and Farfisa organ sounds of that genre with rockabilly, ’50s and ’60s R&B, and surf into a potent retro stew the group likes to call “super rock.” The group formed in 1976 in Queens, NY with vocalist/keyboardist Peter Zaremba, guitarist Keith Streng, bassist Jan Marek Pakulski, and drummer Bill Milhizer and aimed to return rock & roll to the simplicity and unselfconsciousness of the ’50s and early ’60s.