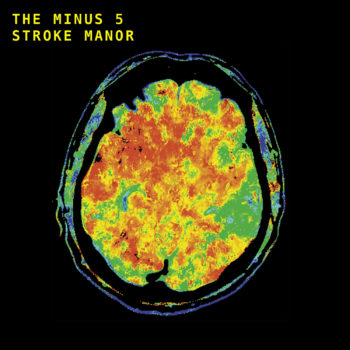 “…Stroke Manor is first and foremost the work of a one-of-a-kind talent who, for all his setbacks, has not lost his gifts or his determination to make the most of them…this is a unique and truly powerful work.” – All Music

Northwest underground stalwart Scotty McCaughey suffered a stroke in November 2017, that nearly killed him and wiped his entire musical catalog, including material from The Minus 5, Young Fresh Fellows, The Baseball Project, R.E.M., and more, from his memory.

Less than three days after a doctor predicted he would never play music again, McCaughey began writing his next The Minus 5 album while still in ICU, unable to speak coherently, and with his right side just awakening from paralysis. Instead of wallowing in self-pity, he channeled his positive spirit and began to write down whatever incoherent thoughts crossed his mind.

He turned those stream-of-consciousness notebook pages into The Minus 5’ 13th album, Stroke Manor. And, after a couple of weeks in a hospital bed and recovery at his home in Portland, McCaughey recorded the album with significant contributions from Peter Buck, Corin Tucker, Joe Adragna, Jeff Tweedy and more.

Yep Roc Records will release Stroke Manor on CD, LP and digital platforms on June 14. Previously only available as a Record Store Day 2019 limited edition title, which resulted in career-high Billboard chart positions for The Minus 5:

McCaughey, who performs with Young Fresh Fellows. R.E.M., The Baseball Project, Tired Pony, and Tuatara, leads the band as a singer, songwriter, and multi-instrumentalist. The Minus 5’s lineup on recordings and performances is constantly and intentionally in flux, dependent on “musician availability, whim, and wind direction.”