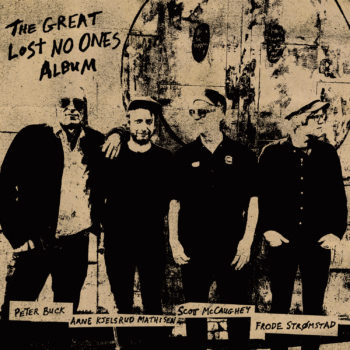 The No Ones Set to Release Debut; ‘The Great Lost No Ones Album’ Out March 27

The No Ones, the new bi-continental collaboration featuring Scott McCaughey, Frode Strømstad, Peter Buck, and Arne Kjeisrud Mathisen, will release their full-length debut album, The Great Lost No Ones Album, on March 27 via Yep Roc Records.The first single, “No One Falls Alone,” is now at all streaming services and the album is available for pre-order.

Stretching from Norway through Athens, Georgia to the northwest corner of the United States, and consisting of members from R.E.M., I Was A King, The Minus 5, The Baseball Project, etc., The No Ones are classic two guitars, bass, and drums, sounding like what you might expect, only different, more-so, and better! The 13-track album was recorded in June 2017, at Type Foundry by Adam Selzer in Portland, OR, and features Patterson Hood (“Straight Into The Bridge” and “Sweet Home Mississippi”), Darren Hanlon (“All You Need Is Rain,” “Too Blind To Believe, “Turn Again”), Andrew Reiger and Davey Wrathgabar (“Dream Something Else”), Lucy Parnell (“Sun Station Vadsø”), and Debbi Peterson (“Gone”).

With music by the collective and lyrics by McCaughey about abduction, interstellar mysteries, witchcraft, climate change, gentrification, and the desolation of the soul, their vocal harmonies and psychedelic flourishes fuse the sunny turbulent sounds of the ‘60s with the darkness and decay of present day.

Pre-order your copy of The Great Lost No Ones Album now from the Yep Roc store!  First Edition LP includes full length album PLUS a 2 track bonus 45 – both on yellow and purple splatter vinyl.

Tags: New Release, Scott McCaughey, The No Ones, Tour Dates