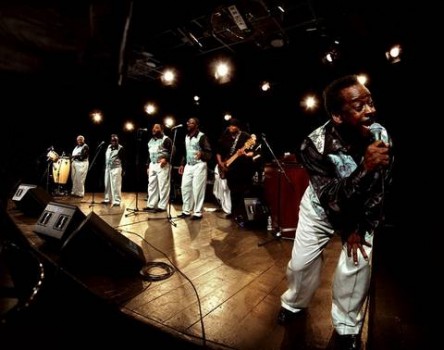 Mixing in psychedelic soul and funk, Dallas gospel group The Relatives were Texas legends in the ’70s, sharing bills with The Staple Singers, The Mighty Clouds of Joy, and The Five Blind Boys of Mississippi, among others. They disbanded in the early ’80s but when Heavy Light records put out a compilation of their obscure, out-of-print 45s a few years ago, The Relatives got back together.

Now, with production help from Spoon’s Jim Eno and backing from former Black Joe Lewis guitarist Zach Ernst and others, The Relatives are set release their first ever album, The Electric Word, on February 19 via Yep Roc. We’ve got the premiere of “Things Are Changing” from it which you can stream below.

Before the album drops, The Relatives will be bringing the Gospel to NYC for three shows: a free show at Lincoln Center on January 10 (info); the WFMU benefit at The Bell House on January 13 with Jon Spencer Blues Explosion and more (tickets); andJoe’s Pub on January 14 with Debo Band (tickets).

Listen below to hear “Things Are Changing” from the band’s upcoming album, Electric Word in the player below, and visit Brooklyn Vegan HERE for more awesome vintage videos from The Relatives.